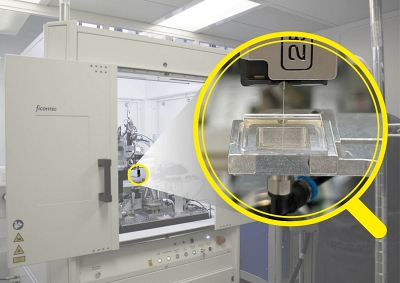 Researchers in Germany and The Netherlands have devised a new laser welding process for photonic integrated circuits (PICs) that they believe could be scaled to mass production - thus making biophotonics applications more commercially viable.

Developed under the BMBF-funded “PICWeld” Eurostars project and subsequent follow-up work, the effort has been led by the Fraunhofer Institute for Reliability and Microintegration (IZM), with support from LioniX, Phix Photonics, and ficonTEC.

Adhesive-free approach
Their approach uses a carbon dioxide laser and is described as space-saving and robust, as well as eliminating the need for adhesives.

“Integrating the process into an automated alignment system has proven its industrial maturity, making the glass-glass joining technique extremely attractive for commercial use,” stated IZM, emphasizing that the welded joints maintain good light transmission between optical fibers and the PIC - critical for applications in biochemistry.

In contrast, joining with adhesives can lead to optical degradation and significant transmission losses in the longer term, which IZM describes as “fatal” in medical and life sciences.

Adhesive joins are commonplace in conventional optics, but the softness of the adhesive can cause the relative positions of components to change over time, while also creating an interference point between the two glass surfaces. The typical result is signal attenuation, while the adhesive also becomes brittle as it ages.

Led by Alethea Vanessa Zamora Gómez, the Fraunhofer collaboration aimed to come up with a direct, thermally robust and transparent glass-glass joint that would be simpler and more durable than the standard joining method.

And to bring the technology a step closer to industrialization and high scalability, the team pursued an entirely new automated process system that has now been developed.

“The resulting system enables an adhesive-free interface and highly efficient coupling of welded-fiber PICs which include integrated waveguides,” stated IZM.

Heat capacity challenge
Among the challenges faced were the different sizes and heat capacities of the glass fibers and the substrates, which results in very different thermal behavior - potentially causing deformation and cracks during cooling.

“The solution [from] the photonics experts was to pre-heat the substrate evenly by means of a separate, individually adjustable laser, so that the melting phase of the fiber and the substrate is achieved simultaneously,” explains the team.

“With our CO2 laser welding system, we have expanded the process behind the existing principle,” said Zamora Gómez. “The high automation potential in particular allows customers to use PICs with maximum coupling efficiency.”

While biophotonics applications were the primary focus during the project, Zamora Gómez believes that the system could also find use in quantum communications and high-performance photonics.