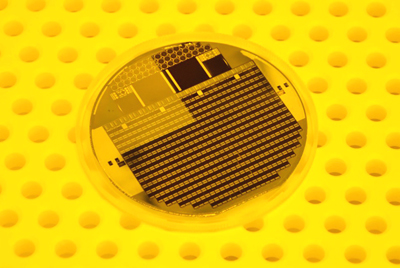 Efficiency of best four-junction solar cell has improved from 46.1 to 47.6 percent.

Researchers at the Fraunhofer Institute for Solar Energy Systems (ISE), using a new antireflection coating, have successfully increased the efficiency of the best four-junction solar cell to date from 46.1 to 47.6 percent, at a concentration of 665 suns.

This is a global milestone, claims the ISE, “as there is currently no solar cell with a higher efficiency worldwide.” The results were presented on 30 May at the Second International Tandem PV Workshop, held in Freiburg, Germany.

For the past two years, the ISE has been working on a project called “50 Percent”. The aim of the project, which is funded by the German Federal Ministry for Economic Affairs and Climate Action, is to develop a solar cell with 50 percent efficiency for the first time.

To achieve this, each individual layer of the complex multi-junction solar cell undergoes further optimization. Improvements in the process technology are incorporated for metal contacts and antireflection layers.

Now the project team has reported achieving a first breakthrough: their latest solar cell under concentrated sunlight (“665 suns”) achieves an efficiency of 47.6 percent.

“We are thrilled with this result, which was achieved only one year after the opening of our new Center for High Efficiency Solar Cells,” commented Dr. Frank Dimroth, department head of III-V Photovoltaics and Concentrator Technology at Fraunhofer ISE.

“In our research, we aim to make concentrating photovoltaics even more efficient and competitive, as we believe that this is the most sustainable form of renewable electricity generation." 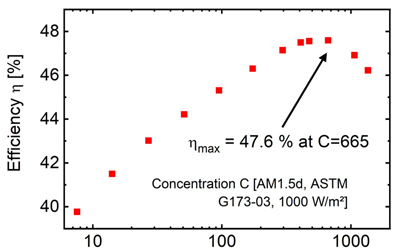 Efficiency increases with concentration up to 665 suns.

Now an improved contact layer and a four-layer antireflection coating were applied to the tandem cell structure in Fraunhofer ISE’s Center for High Efficiency Solar Cells. These measures reduce the resistance losses and the reflection on the front side of the cell, which is spectrally sensitive within a broad range of 300 and 1780 nm. Conventional solar cells made of silicon absorb sunlight only up to a wavelength of 1200 nm and thus do not require such a broadband antireflection coating.

Multi-junction solar cells made of III-V compound semiconductors have always been among the most efficient solar cells in the world. They reach their highest potential when the incoming sunlight is concentrated by lenses onto miniature solar cell devices of just a few square millimeters in size.

“Possible applications of such highly efficient tandem solar cells include concentrator photovoltaic systems, which contribute to efficient power generation in sun-rich countries,” commented Prof. Dr. Stefan Glunz, division director of Photovoltaics Research at Fraunhofer ISE. “With tandem photovoltaics, it is possible to leave the limitations of single-junction solar cells behind and ultimately achieve a reduction in solar power costs.”