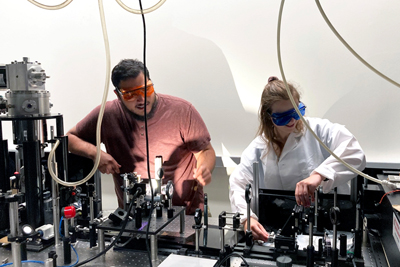 Researchers at the University of Oklahoma, with the National Renewable Energy Laboratory, the University of North Texas, the NASA Glenn Research Center and several collaborators within the space power community, have recently published a paper in the journal Joule describing the optimal conditions for testing perovskite solar cells for space.

Ian Sellers, a physicist at the University of Oklahoma and a co-author of the paper, said perovskite solar cells are creating excitement in the photovoltaics community due to their rapidly increasing performance and their high tolerance to radiation that suggests they could be used to provide power for space satellites and spacecrafts.

Sellers, who is also the Ted S. Webb Presidential Professor in the Homer L. Dodge Department of Physics and Astronomy in the Dodge Family College of Arts and Sciences, and the associate director of the Oklahoma Photovoltaics Research Institute, has mentored multiple graduate students and a postdoctoral researcher in this field.

“Perovskites are exciting to a lot of people in the photovoltaics community because this new solar cell material can reach high efficiencies and has done so quickly and relatively simply,” Sellers said.

“But these materials also have significant issues in terms of stability and yield, particularly in atmospheric conditions. Moisture and oxygen degrades this material, so it was interesting that there were a few people who suggested that despite these terrestrial instability issues, this system appeared radiation hard and appropriate for space.”

The problem the team from OU, NREL and the University of North Texas set out to solve was how applicable standard space testing of solar cells are for the perovskites.

“What we found was that perovskites are radiation hard but not for the reasons many believed,” Sellers said. “We found that the community in general is not testing them properly. Perovskites are thin films, and they are also very soft, so if you use the space protocols developed for traditional solar cells, the interaction of high-energy particles is negligible, meaning perovskites looked radiation hard because they were not, in our opinion, being tested properly.”

To develop a new way to test the perovskites, Durant worked with Bibhudutta Rout, an associate professor in the Department of Physics at UNT in Denton, Texas, to measure the solar cells’ radiation hardness under different conditions or radiation exposure.

“We started doing these very targeted radiation dependence tests by controllably stopping these particles in different parts of the solar cell,” Sellers said. “So rather than using very high-energy particles, we were using lower-energy particles, specifically protons, since these are more harmful for the perovskites and are very prevalent in space. We confirmed that perovskites indeed are very radiation hard because they are soft and they are not very dense, so when damaged, they heal quickly.”

Sellers compares the effect to a tub of water. The water starts out as still. You can splash the water to create chaos, but it will go back to stillness once the splashing stops. “These perovskites are very close to being like a liquid, so when they are damaged, they self-heal,” he said.

“Perovskites, like a tub of water, will be disordered and damaged in space, but will also very quickly settle or heal and go back to normal. What we have done is to create a protocol, a set of conditions that perovskite cells must be tested at before they go into space, so that the global community is testing these materials properly and in the same way.”

Applications for this research opens an array of possibilities. One area of research interest includes the investigation of perovskite use in permanent installations on the moon, specifically in whether lightweight flexible perovskites could be sent into space folded up and successfully deployed there, or even made on the moon. 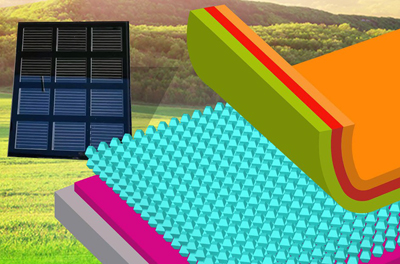 Scientists at EPFL, Lausanne, Switzerland, have found a way to overcome power loss and the manufacturing complexity of scaling up perovskite solar cells.

Perovskites are hybrid materials made from metal halides and organic compounds. They have attracted a lot of interest in the field of solar energy because of their light-harvesting capacities combined with a low cost of manufacturing, making them prime candidates for overtake the market from their silicon counterparts.

One of the obstacles limiting the commercialization of perovskite solar cells is that scaling them up results to losses in power-conversion efficiency and operational stability. This is due to natural defects in the perovskite molecular structure, which interferes with the flow of electrons. This results in “resistive loss” – a power loss due to resistance. In addition, the processes required to achieve high-quality large-area perovskite films are quite complex.

In the latest EPFL study, scientists led by Mohammad Nazeeruddin have found a way to overcome the scaling up problems of perovskites. The scientists have developed an easy solvothermal method that can produce single-crystalline titanium dioxide rhombohedral nanoparticles that can be used to build a perovskite film.

The new structure features a lower amount of lattice mismatches, referring to the ladder-like structure of the titanium dioxide nanoparticles. This translates into a lower number of defects, which ensures better electron flow throughout with lower power loss.

Testing the new nanoparticle-based, small-size solar cells, the scientists achieved a power-conversion efficiency of 24.05% and a fill factor (a measure of actual obtainable power) of 84.7%. The cells also maintain about 90% of their initial performance after continuous operation for 1400 hours.

The scientists also fabricated large-area cells, which certified an efficiency of 22.72% with an active area of nearly 24 cm2. This “represents the highest efficiency modules with the lowest loss in efficiency when scaling up,” concluded the authors.