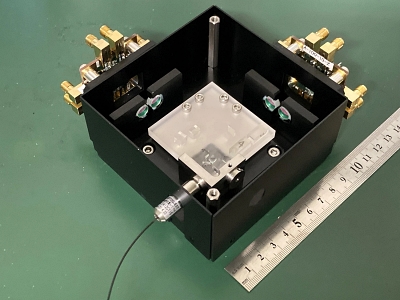 Mitsubishi Electric is claiming a significant advance in the fast-growing field of optical space communications, with what is believed to be the first laser terminal that can also sense the precise direction of an incoming beam.

All those efforts are seeking to take advantage of the much higher data transmission speeds possible at optical frequencies compared with radio waves, for example to send high-resolution satellite imagery of natural disasters or war zones much more quickly.

But with no optical fiber to direct the laser beams across space there is a huge challenge when it comes to pointing the optical links in exactly the correct direction.

Mitsubishi Electric points out that the laser beams are only about one-thousandth the size of a radio wave, making it extremely difficult to align them with satellites traveling at high speeds.

Now the industrial technology giant claims that it has developed an optical receiver that makes that much easier, by integrating functions and using a “quadrant” photodetector to sense the direction of an incident beam.

“The result is a downsized optical receiver that enables space optical communication with ten times the speed, capacity and distance of radio communication,” stated the Japanese company.

It adds that the new receiver could also be deployed in areas with minimal infrastructure, for example disaster zones, developing countries, or remote locations.

Coherent communication
Describing its innovation as the “world's first optical receiver that integrates spatial laser acquisition in the photodetector”, Mitsubishi Electric says that the spatial element works by comparing the intensity of output signals from each of the four segments that make up the detector.

“The dedicated sensor for detecting beam directions in conventional systems is no longer necessary,” it explains.

Inside the receiver is a newly developed optical circuit for coherent optical communication that detects the incoming beam over four phases, corresponding to 0, 90, 180, and 270 degrees.

Previously only two phases (0 and 180 degrees) have been used to detect the incoming beam, meaning that communication capacity and speed are also increased.

“The coherent detection method enables communication even with weaker laser beams compared to the conventional method of detecting intensity changes due to beams turning on and off, thus enabling communication over longer distances using the same laser beam intensity,” claims the firm.

“In addition, the coherent method is less influenced by sunlight and other background light for more stable communications.”

MItsubishi Electric has combined the functions within a lightweight optical receiver measuring approximately 10 x 10 x 10 cm, with the optical circuit housed on a 5 x 5 cm glass substrate, and two photodetectors on a single PCB.

As a result, the module is less than a quarter of the size of Mitsubishi Electric's previous model.