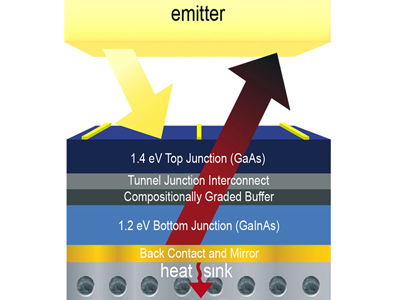 The US National Renewable Energy Laboratory (NREL) has long been developing solar cells that convert light from the sun at record-setting efficiencies. But the sun is not the only light source from which photovoltaics can capture energy. Hot objects emit light, too—generally at longer, lower-energy wavelengths—and thermophotovoltaics (TPVs) are cells optimized to capture such light.

A new photovoltaic cell developed by NREL far surpasses the previous, 32% world-record efficiency for TPVs. The device, developed for a joint demonstration with the Massachusetts Institute of Technology (MIT) of an electric-energy storage concept, is described in Nature.

The record-efficiency device, which was designed to harvest energy from an object heated to 2,400°C, reached a maximum efficiency of 41.1% (± 1%), with an average efficiency of 36.2% over a range of relevant temperatures.

“High efficiency is crucial to the engineering and economic viability of TPV systems, and this new 41% record efficiency is a giant step toward making this thermal energy grid storage concept a reality,” commented Dan Friedman, an NREL author on the Nature paper.

Significantly, a TPV device with 40% efficiency can convert heat to electricity at greater efficiency than conventional steam turbines, such as those used in coal or nuclear power plants. TPVs offer the potential for lower costs, faster response times, compatibility with an extremely wide range of system sizes (from watts to gigawatts), and lower maintenance costs due to fewer moving parts.

Thermal energy grid storage systems operate as a battery that takes in electricity and converts it to high-temperature heat for storage. TPVs then convert that heat back to electricity when needed, providing low-cost, on-demand clean energy. The TPV device created by the team—once demonstrated in the larger joint project with MIT—could represent a crucial milestone in making clean energy storage low cost and scalable.

“Using electrical-to-thermal conversion to store energy offers great benefits in scaling energy storage and siting it where it's needed. The development of a new world-record TPV cell improves the thermal-to-power conversion of thermal energy storage, making the technology more appealing than ever to support increasing needs for renewable integration.”

The 41%-efficient TPV device is a tandem cell—a photovoltaic device built out of two light-absorbing layers stacked on top of each other and each optimized to absorb slightly different wavelengths of light. The team achieved this record efficiency through the usage of high-performance cells optimized to absorb higher-energy infrared light when compared to past TPV designs. This design builds on previous work from the NREL team.

Another crucial design feature leading to the high efficiency is a highly reflective gold mirror at the back of the cell. Much of the emitted infrared light has a longer (less energetic) wavelength than what the cell's active layers can absorb.

This back surface reflector bounces 93% of that unabsorbed light back to the emitter, where it is reabsorbed and reemitted, improving the overall efficiency of the system. Further improvements to the reflectance of the back reflector could drive future TPV efficiencies close to or above 50%.