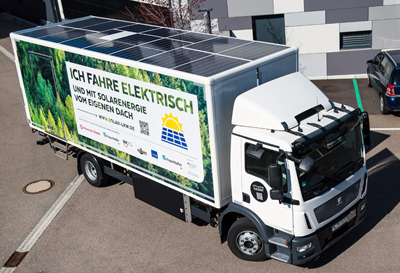 A heavy-duty truck weighing 18 tons and equipped with a 3.5 kilowatt-peak photovoltaic system is now driving on Germany's roads. The commercial vehicle with integrated high-voltage photovoltaic system and feed-in to the 800V traction battery has been approved for road traffic.

The solar power produced directly on the vehicle can cover 5 to 10 percent of the truck’s energy needs. In the Lade-PV project, the Fraunhofer Institute for Solar Energy Systems (ISE), with its project partners from industry and the Fraunhofer Institute for Transportation and Infrastructure Systems (IVI), has developed solar PV modules and power electronics for integration in commercial vehicles.

The developers say that the truck – the first such equipped with these PV modules – has now passed the technical inspection, marking what they describe as “a milestone towards more climate-friendly road freight transport.”

Christoph Kutter, project manager at Fraunhofer ISE, commented “By successfully putting our high-voltage photovoltaic system into operation, we have achieved our goal of demonstrating the feasibility of vehicle-integrated photovoltaics for heavy-duty electric utility vehicles. The technical components integrated into the truck function as expected.”

The particularly lightweight and robust PV module prototypes were developed by Fraunhofer ISE and built by Sunset Energietechnik. TBV Kühlfahrzeuge integrated the new modules into the box body of a Framo electric truck, which is serving as the first demonstrator vehicle.

To ensure that the electricity yields are high and the material and cabling costs are low, the solar modules in the truck roof are connected in series. The resulting high voltages of up to 400V could pose a safety risk in the event of an accident.

In order to avoid this, Fraunhofer ISE has developed a separation device, which is located in the junction box of each PV module. In the event of an accident, the device disconnects the power within milliseconds, so that only harmless, low protective voltages are present throughout the system.

As with the PV modules, the power electronics were also adapted to the requirements of the commercial vehicle. Project partner M&P Motion Control and Power Electronics GmbH developed a DC power controller that communicates with the vehicle control system via CAN bus and is integrated into the vehicle's safety concept. The photovoltaic power generated on the roof is fed directly into the on-board power supply of the commercial vehicle.

The truck with integrated photovoltaic system will be used in the Freiburg area daily by the company Alexander Bürkle GmbH. The truck’s operation will be regularly tested for one year to validate the electricity yield forecast and monitor the components under real conditions. Also, the energy forecast model "IVImon" of Fraunhofer IVI will accompany the truck on all routes throughout the year. This model forecasts the range, charging times and power generation for different routes depending on the vehicle consumption and the solar radiation.

Vehicle-integrated photovoltaics has gained increasing interest in science and industry in recent years, also with respect to heavy-duty and commercial vehicles. From December 6-8, 2021, the first international conference dedicated to the topic PV IN Motion will be held online. 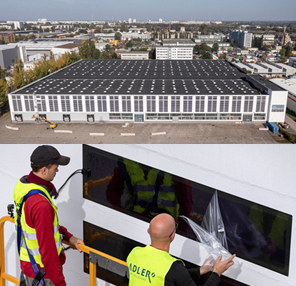 Braunschweig, Germany-based Green GmbH, a subsidiary of Garbe Industrial Real Estate GmbH has activated the new film photovoltaic system fitted to the external façade of its own logistics building in Berlin Hohen-schönhausen, in cooperation with the companies Heliatek and Adler Smart Solutions.

Avoiding CO2 emissions wherever possible, Green says it is also pursuing this aim for other GARBE properties. The system is designed to extend the lifespan and utilization cycles of the properties and enhance the attractiveness of the locations long-term. Moreover, says Green, “it can help avoid demolition, which is a waste of energy.

“If the installation of a conventional roof-mounted photovoltaic system is not possible on roofs due to insufficient static or structural stability, older buildings may be retrofitted in the future by mounting organic photovoltaic films laterally on their façades. As part of this pilot project, the innovative PV modules from Heliatek were installed by ADLER on the south side of the logistics hall in Berlin Hohen-schönhausen.