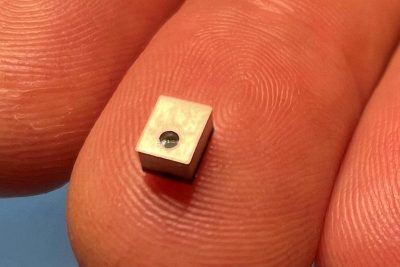 The venture capital division of laser giant Trumpf has led a €15 million round of investment in a 20-employee Norwegian startup company that has developed optical MEMS-based microphones said to be capable of high-quality audio performance.

Together with an investor group including the European Innovation Council’s venture fund, plus Norway’s Skagerak Capital, Investinor, and SINTEF Venture IV, the series A money will be used to help scale up production of the microphones to industrial quantities.

According to sensiBel, which was founded in 2016 following initial development at the SINTEF research institute in Trondheim, the laser-based audio technology is capable of studio-quality performance in a millimeter-scale package.

“Such microphones are just as compact as other MEMS-based solutions on the market and deliver a significantly better quality of sound,” says Trumpf, adding that it would be providing sensiBel with strong support with the required photonics technology.

“This technology enables speech recognition over greater distances and also in loud environments.”

Outside of the studio, the technology could find use in consumer electronics, medical devices and applications in the automotive industry. According to Trumpf, the overall market for MEMS microphones will amount to 8 billion units this year.

sensiBel CEO Sverre Dale Moen said: “Based on tests with customers, we have been able to demonstrate a quality of transmission that was not technically feasible before the development of our microphone.

“We were told a few years back it would not be possible to make a MEMS microphone with ten times better performance than today’s state-of-the art MEMS microphones.

“With the backing of our investors, we can now move forward with international marketing.”

As well as supporting the ramp to mass production, the funding round will be used to expand the firm’s research and development activities.

VCSEL expertise
Trumpf explains that MEMS microphones work via the operation of a membrane that is set in motion by sound waves. In the case of conventional MEMS microphones, which are based on capacitance, the movement of the membrane is measured by electrical field changes between the membrane and a rigid backplate.

However, the optical system deployed in the sensiBel microphone makes this measurement by projecting light onto the membrane using a VCSEL emitter and a diffraction grating.

“This light is reflected and then captured and analyzed by photodiodes,” adds Trumpf. “Unlike the conventional method, this new technology enables the measurement of very small movements of the membrane, and therefore very low levels of noise.”

Trumpf gained VCSEL expertise back in 2019 with its acquisition of Philips Photonics.

Terje Berg-Utby, principal at Skagerak Capital, commented: “The [much] improved performance of the sensiBel MEMS microphone compared to competition enables performance that have never been possible [before].

“We are excited about sensiBel, their technology and team, and the great feedback the market provides about the needs and opportunities for the sensiBel products.”