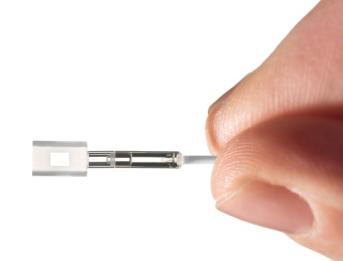 Xarion this week confirmed the completion of its Series A round of financing, after winning the backing of the German laser giant as its largest investor. Other investors in Xarion include Hans-Peter Porsche, of the famous automaker family.

The aim of Trumpf Venture, launched in September 2016, is to extend the firm's range of activities to identify disruptive technologies at an early stage and then promote them. Its stated intent is “to act both as a venture capital investor and as a strategic partner for technology-oriented startups”.

Xarion has developed the world's first laser-based optical microphone. The design enables the measurement of ultrasonic waves in the air or in liquids. The developer says its use will be instrumental in the development of fields such as non-destructive material testing, process control in industrial environments, and medical diagnostics.

Xarion began as a spin-off from the Vienna University of Technology. In a five-year research program jointly funded by Knowles Electronics Austria (formerly PHILIPS/NXP), the membrane-free Optical Microphone has now successfully passed the proof-of-principle stage. Its first products were launched on the market in H2/2015. The technology can be implemented as a fiber-coupled (Eta, Eta L Ultra) or an integrated, miniaturized (MicrOS) sensor.

Xarion’s potential was spotted at least two years ago when the company was runner-up in the SPIE Startup Challenge at Photonics West in 2015, where Balthasar Fischer, the company’s CEO, pitched his membrane-free, optical microphone to a panel of judges and attendees.

“The device requires neither a membrane nor any other moving component to convert sound into electrical voltage, exploiting the fact that sound can change the speed of light,” Fischer explained. "Our laser sensors can be used profitably in a range of industrial applications. Crucially important here is the ten-fold frequency range compared to state-of-the-art acoustic sensors." 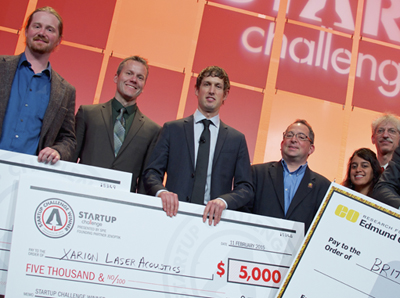 Balthasar's gift: Xarion was runner-up at SPIE's Startup Challenge in 2015.

The unspecified seven-figure investment underlines Xarion’s and Trumpf Venture’s joint intention to work together on the use of optical sensors in industrial process monitoring. Trumpf believes that its technological experience and its connections with industry offer good opportunities for the development and growth of Xarion.

"With these unprecedented opportunities in process monitoring, Xarion is a key contributor to further quality improvements and new applications in the Industry 4.0 environment," said Christof Siebert, Head of Technology Management at Trumpf, explaining the background to the investment.

In 2016, after several years of development, Xarion says it has now successfully entered the market. In addition to various high-precision sensors, it also supplies the necessary software for data analysis.