Fiber laser firm's stock price rises 15% despite costs of move to shift component production away from Russia and Belarus. 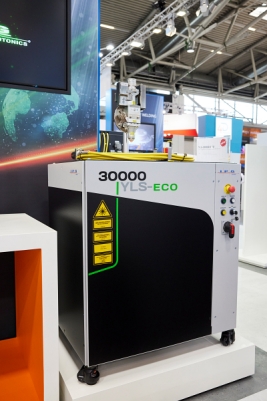 IPG Photonics has reported sales of $370 million for the opening quarter of 2022, easily beating the forecast range of between $320 million and $350 million.

And despite additional costs incurred by the company as it shifts production of some key components from sites in Russia and Belarus to the US and Europe, IPG was still able to post a slight year-on-year increase in net income, which rose 2 per cent to $70 million.

Those figures, plus an upbeat forecast suggesting sales would be at a similar level in the June quarter, prompted a 15 per cent increase in IPG’s stock-market valuation shortly after the company’s release.

Diversification trend
Commenting on the latest figures, CEO Eugene Scherbakov said: “We are particularly pleased to see that growth was driven by many emerging applications across all major geographies.

“As we stand back, we can identify several macro trends, such as automation and miniaturization, as well as a focus on sustainability, renewable energy, and energy efficiency, including EVs, which are driving this increased demand.

That diversification means that sales to customers in China in the latest quarter represented only 35 per cent of turnover - down from 40 per cent a year ago.

“Our welding revenue was a record in the quarter and has become almost as important as our revenue from high-power cutting applications in some regions or even outgrowing it - as we saw in China,” Scherbakov added.

“In Europe and North America, we see increasing adoption of lasers in cutting applications as global manufacturers redirect investments to local supply chains and increase adoption of automation in manufacturing processes.”

The CEO also pointed out that IPG was benefiting as manufacturers looked to further automate in response to worker shortages and increased labor costs.

Demand for the firm’s “LightWeld” product - a handheld laser welder - is also increasing, partly because it is relatively easy to use and, unlike traditional welding techniques, only requires a few hours of training.

“We have launched a third generation of the device, including an extended range of welding and cleaning capabilities for more diverse materials,” Scherbakov said.

Russia investment ended
Another macroeconomic trend in IPG’s favor is the sharp increase in energy costs, partly resulting from Russia’s invasion of Ukraine. Scherbakov said that interest in the company’s “ECO” laser product range was increasing, thanks to a wallplug efficiency figure of more than 50 per cent.

IPG, which was originally founded in Russia and still has significant operations both there and in neighboring Belarus, is currently taking steps to reduce its reliance on its sites in the countries.

According to its most recent filings, IPG had employed nearly 2000 people in Russia, mostly at its large-scale facility in Fryazino, near Moscow. The company also has a large site in the Belarus capital Minsk, where it produces cabinets and mechanical sub-components.

“[We] have stopped new investments in the region while increasing manufacturing capacity in North America and Western Europe,” the CEO said, telling an investor conference call that it had increased activity in the US, Italy, and Germany, to shift production away from Russia.

“We have also been qualifying third-party suppliers for certain components. These activities, which will accelerate during the second and third quarter this year, would significantly reduce IPG's reliance on Russian components by year-end.”

The company sees the move as an opportunity to increase its own level of automation, with a view to improving product yields and productivity.

“We recognize the risks of operating in the region as an escalation of sanctions would potentially have a significant impact on our business because the large capacity for critical components that many of our lasers rely on is currently in Russia,” noted the CEO.

“As we are making these decisions, we are doing our best to protect the interests of our employees and their families.”

Humanitarian aid
IPG is also taking steps to assist those directly impacted by the invasion. “To help with the humanitarian crisis, IPG allocated half a million dollars to provide financial aid to our employees who help refugees from Ukraine,” Scherbakov pointed out.

“We are proud to hear that many of our employees have opened their homes to the refugees and provided clothes, food, and temporary housing.”

• Shortly following the release of IPG’s latest results, the company’s Nasdaq-listed stock price rose in value by around 15 per cent.

However at just below $113, the stock has lost nearly half of its value over the past 12 months, with the firm’s market capitalization now standing at just over $6 billion.