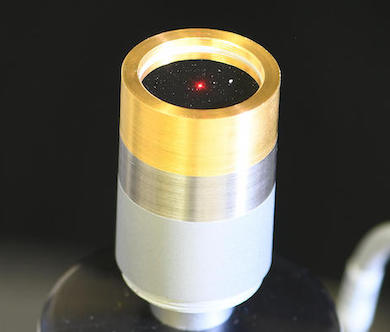 Microphone calibration is an important issue for noise monitoring stations, sound power measurement systems and audiometric equipment, among other applications.

A project at NIST has now demonstrated an alternative laser-based technique, and reported the results in acoustics journal JASA Express Letters.

The new method involves scanning laser Doppler vibrometry (LDV), a non-contact technique in which laser light reflected back from a vibrating surface experiences a Doppler shift which can reveal the amplitude and frequency of the vibrations.

LDV has a long heritage in industrial applications, enjoying a boom in the automotive sector during the early 2000s thanks to its ability to provide continuous real-time information in the spectral domain in production line environments.

More recently LDV has been applied to assessing the ripeness of avocados, and to the monitoring of cardiovascular disease where the nature of any obstructions building up in a blood vessel can affect the Doppler shift. Last year a European Horizon 2020 project was launched to develop a handheld LDV device for clinical cardiovascular assessments, exploiting the development of suitable photonic integrated circuits.

"People have been looking for a highly accurate microphone calibration method that uses lasers, and they haven’t found an approach that is competitive with the most accurate existing method," said NIST scientist Richard Allen. "But now we’ve found a comparison calibration that is better than the ones used in common practice."

Lasers bringing vibration and acoustics together

To conduct the new test, NIST used nine nominally identical laboratory standard microphones, each with an 18.6 millimeter diameter diaphragm. All were tested at 250 hertz and 1,000 hertz. Electrical drive current and diaphragm velocity were measured while the microphones were driven as transmitters and sources of sound, with the diaphragm velocity being measured using scanning LDV.

"The key to making the velocity measurements nice and repeatable is measuring in the center of the diaphragm," commented Randall Wagner of NIST. "As you go further and further toward the edges, our measurements just weren’t very repeatable."

Comparing the microphone sensitivities measured with LDV-based calibrations to measurements previously taken using existing gold-standard calibrations, termed "reciprocity" comparisons, revealed that the numbers "were statistically indistinguishable from each other" according to Wagner. Another key metric, the uncertainties in the measurements expressed as a decibel parameter, were found to be lower for the new laser method.

NIST commented that the laser comparison method saves significant amounts of time, primarily because it is performed in open air. Traditional comparisons at higher frequencies require connecting two microphones with an acoustic coupler and then filling the coupler with hydrogen, which takes up to 20 minutes per test.

"There’s nothing like this on the market that I’m aware of," said Randall Wagner. “I've been at NIST 30 years, and I don't recall a project that brought vibration and acoustics so closely together."