Glass-in-glass manufacturing operation could make components for spectroscopy and sensing. 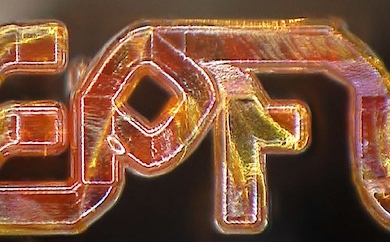 Chalcogenide glasses, based on various combinations of the chalcogen elements sulfur, tellurium and selenium, are attractive optical materials thanks to their wide IR transmission window and potentially nonlinear properties.

They also tend to possess poor mechanical properties plus low chemical and environmental stability, and manufacturing three-dimensional microstructures of chalcogenide glass has remained a challenge.

A project at Swiss research center EPFL has now developed a "glass-in-glass" manufacturing approach that could offer a route to 3D geometrically complex chalcogenide-silica micro-glass composites, suitable for use in IR imaging and sensing.

Published in Optics Express, the technique involves the creation of shaped three-dimensional cavities within fused silica molds which are then filled with chalcogenide glass, creating structures matching the shape of the carved silica mold structures.

"Our technique could open the door to a whole new range of new optical devices, because it can be used to make infrared optical circuits and arbitrarily shaped IR micro-optics that were not previously possible because of the poor manufacturability of IR glass," said EPFL's Enrico Casamenti.

The two materials involved, fused silica and chalcogenide, offer a high-index contrast combination, according to EPFL. In addition to its specific optical properties, fused silica can be used as a mechanically and chemically resistant support and protection for the chalcogenide microstructures, and may itself contain additional features of interest for integration and packaging.

The smallest structure produced in this way measured 30 microns in size, according to the team's published paper, but tuning the parameters involved, such as the pressure used during infiltration or the viscosity of the infiltrant, should enable these limits to be pushed further. The same process was also used to demonstrate infiltration of poorly wetting metals such as silver and gold into glass molds having features around 2 microns in size.

In trials, researchers demonstrated the new method by creating various complex shapes including an EPFL logo, using chalcogenide IR glass and a silica glass substrate. They also showed, with the help of colleagues at ETH Zurich, that some of the structures they created could effectively be used for guiding mid-IR light emitted from a quantum cascade laser.

One goal will be to use such optical components with sources in the mid-IR range, Progress towards optical components suitable for use at mid-IR wavelengths has been a focus of research for some time, not least due to potential uses in bioimaging and the number of chemical species with a spectroscopic response in that range.

"These optics could be used, for example, for spectroscopy and sensing applications or to create an IR camera small enough to integrate into a smartphone," commented Enrico Casamenti.