Pressurizing gas method can be applied to any wavelength from infrared to ultraviolet, and to any gas. 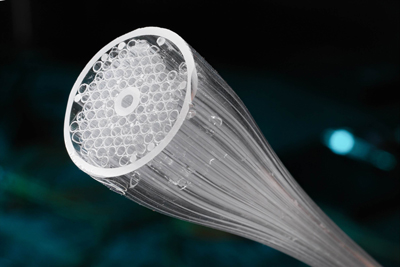 The Fiber Optics Group in the School of Engineering at Ecole Polytechnique Federale de Lausanne (EPFL), Switzerland, has developed a technology that will amplify light inside the latest hollow-core optical fibers.

“The idea had been going around my head for about 15 years, but until recently I never had the time or the resources to do anything about it,” commented Luc Thévenaz, the head of the Fiber Optics Group.

Most optical fibers feature a solid glass core, with no air or other gas inside. Light can travel along the fibers but typically loses half of its intensity after 15 kilometers. The intensity keeps weakening until it can hardly be detected at 300 kilometers. So to keep the light moving, it has to be amplified at regular intervals.

Thévenaz’s approach is based on hollow-core optical fibers that are filled with either air or gas. “The air means there’s less attenuation, so the light can travel over a longer distance. That’s a real advantage,” said the professor.

“But in a relatively thin substance like air, the light is harder to amplify. “That’s the crux of the problem: light travels faster when there’s less resistance, but at the same time it’s harder to act on. Luckily, our discovery has squared that circle.”

So what did the EPFL researchers do? “We just added pressure to the air in the fiber to give us some controlled resistance,” explained Fan Yang, a postdoctoral student. “It works in a similar way to optical tweezers – the air molecules are compressed and form into regularly spaced clusters.

“This creates a sound wave that increases in amplitude and effectively diffracts the light from a powerful source towards the weakened beam so that it is amplified up to 100,000 times,” he added.

Their technique therefore makes the light considerably more powerful. “Our technology can be applied to any type of light, from infrared to ultraviolet, and to any gas,” Fan said. Their findings have just been published in Nature Photonics.

The scientists say that the technology could serve other purposes in addition to light amplification. Hollow-core or compressed-gas optical fibers could, for instance, be used to make extremely accurate thermometers, such as for an emergency fire detection system.

“We’ll be able to measure temperature distribution at any point along the fiber. So if, for example, a fire started inside a tunnel, we would know exactly where it began based on the increased temperature at a given point,” said Flavien Gyger, PhD student.

In another possible application, this technology could also be used to create a temporary optical memory by stopping the light temporarily in the fiber for a microsecond – which would be a factor of ten times longer than is currently possible.

The abstract of the Nature Photonics paper “Intense Brillouin amplification in gas using hollow-core waveguides” reads as follows: “Among all the nonlinear effects stimulated Brillouin scattering offers the highest gain in solid materials and has demonstrated advanced photonics functionalities in waveguides. The large compressibility of gases suggests that stimulated Brillouin scattering may gain in efficiency with respect to condensed materials.

“Here, by using a gas-filled hollow-core fibre at high pressure, we achieve a strong Brillouin amplification per unit length, exceeding by six times the gain observed in fibres with a solid silica core. This large amplification benefits from a higher molecular density and a lower acoustic attenuation at higher pressure, combined with a tight light confinement.

“Using this approach, we demonstrate the capability to perform large optical amplifications in hollow-core waveguides. The implementations of a low-threshold gas Brillouin fibre laser and a high-performance distributed temperature sensor, intrinsically free of strain cross-sensitivity, illustrate the potential for hollow-core fibres, paving the way to their integration into lasing, sensing and signal processing.”