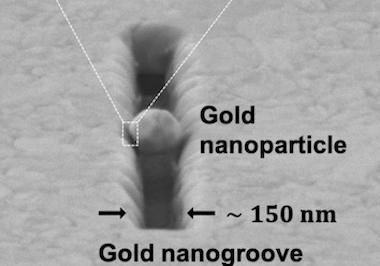 Converting incident light from one wavelength to another is a key aspect of several imaging and sensing technologies, and routes to improving the operation's efficiency are always valuable to developers.

Detection of mid-infrared photons is particularly critical for a number of applications, but traditional detection instruments need to be kept cool so as to avoid interference from thermal noise. Room-temperature detection would be much more convenient.

A project led by Swiss research center EPFL has now demonstrated a mid-IR detector based on optomechanical upconversion, employing a plasmonic nanocavity to change mid-IR light to visible wavelengths.

The team's proof-of-principle breakthrough is based upon using molecules located within a nanocavity as a mediator in the conversion operation. Incoming IR light deposits energy into the molecules where it is converted into vibrational energy, while a laser beam of higher frequency simultaneously impinges on the same molecules.

If the parameters are carefully judged then this complex interaction, involving the excitation of a vibrational mode and its coupling to a pump field at a shorter wavelength, results in an upconversion of the original IR signal to a different wavelength in the visible region.

The design of the nanocavity has a significant influence on the efficiency of the conversion, with the molecules sandwiched between a gold nanoparticle and the gold groove it sits within, effectively forming an optical antenna that concentrates the infrared light and the laser energy at the molecules.

"The new device has a number of appealing features," said Christophe Galland from EPFL. "The conversion process is coherent, meaning that all information present in the original infrared light is faithfully mapped onto the newly created visible light. It allows high-resolution infrared spectroscopy to be performed with standard detectors like those found in cell-phone cameras."

In addition the device is small, only a few microns in length and width, which means it can be incorporated into large pixel arrays, and adds only a low level of noise to the emitted signal. And the method should be highly versatile, according to EPFL, adaptable to different frequencies by simply choosing molecules with different vibrational modes.

In trials the project tested two different nanoantenna designs, one with a "nanoparticle-on-resonator" architecture and the other "nanoparticle-in-groove." Both approaches showed the ability to upconvert continuous-wave mid-IR signals onto the visible domain at ambient conditions, offering "an estimated 13 orders of magnitude enhancement in upconversion efficiency per molecule," according to the project.

EPFL expects the work to be of benefit in spectroscopy applications, and that novel devices exploiting the tailorable interface between surface science, nanotechnology and quantum optics should foster uses in infrared sensing and imaging. First, however, the device's overall efficiency will need to be improved further.

"So far the device’s light-conversion efficiency is still very low," cautioned EPFL's Wen Chen. "We are now focusing our efforts in further improving it, a key step toward commercial applications."