System co-developed with RSK and Teledyne e2v based on telecoms lasers frequency-doubled to 780nm. 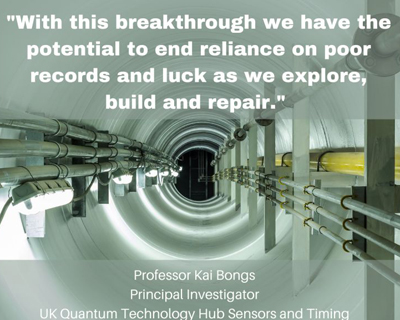 Quantum sensing paves way for a groundbreaking map of world under the Earth.

An object hidden below ground has been located using quantum technology – a long-awaited capability with significant implications for industry, security and human knowledge.

Researchers at the University of Birmingham’s UK National Quantum Technology Hub in Sensors and Timing have reported their achievement in Nature. They say this is the first demonstration in the world of a quantum gravity gradiometer outside of laboratory conditions.

The quantum gravity gradiometer, which was developed under a contract for the UK’s Ministry of Defence and in the UKRI-funded Gravity Pioneer project, was used to find a tunnel buried outdoors in real-world conditions one metre below the ground surface. It wins an international race to take the technology outside.

The sensor works by detecting variations in microgravity using the principles of quantum physics, which is based on manipulating nature at the sub-molecular level. The success, says the team, “opens a commercial path to significantly improved mapping of what exists below ground level.”

Professor Kai Bongs, Head of Cold Atom Physics at the University of Birmingham and Principal Investigator of the UK Quantum Technology Hub Sensors and Timing, commented, “This is an Edison moment in sensing that will transform society, human understanding and economies.

“With this breakthrough we have the potential to end reliance on poor records and luck as we explore, build and repair. In addition, an underground map of what is currently invisible is now a significant step closer, ending a situation where we know more about Antarctica than what lies a few feet below our streets.” 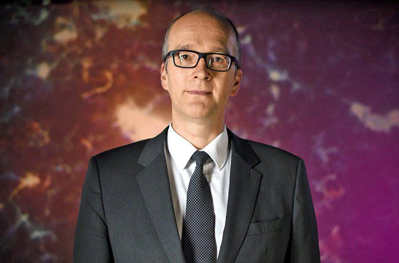 Professor Kai Bongs: “This is an Edison moment.”

Current gravity sensors are limited by a range of environmental factors. A particular challenge is vibration, which limits the measurement time of all gravity sensors for survey applications. If these limitations can be addressed, surveys can become faster, more comprehensive and lower cost.

The sensor developed by Dr Michael Holynski, Head of Atom Interferometry at Birmingham and lead author of the study, and his team at Birmingham is a gravity gradiometer. The system overcomes vibration and a variety of other environmental challenges in order to successfully apply quantum technology in the field.

The successful detection, realised in collaboration with civil engineers led by Professor Nicole Metje of the School of Engineering, is the culmination of a long-term development programme that has been closely linked to end-users from its outset.

This breakthrough will allow future gravity surveys to be cheaper, more reliable and delivered 10 times faster, reducing the time needed for surveys from a month to a few days. It has the potential to open a range of new applications for gravity survey, providing a new lens into the underground.

Professor George Tuckwell, Director for Geoscience and Engineering at RSK Group, said: “Detection of ground conditions such as mine workings, tunnels and unstable ground is fundamental to our ability to design, construct and maintain housing, industry and infrastructure. The improved capability that this new technology represents could transform how we map the ground and deliver these projects.”

The breakthrough is a collaboration between the University of Birmingham, environmental, engineering and sustainability solutions provider RSK, Dstl (the Defence Science and Technology Laboratory, part of the UK Ministry of Defence), and technology company Teledyne e2v. The project is funded by UK Research and Innovation (UKRI) as part of the UK National Quantum Technologies Programme, and under contract from the Ministry of Defence.

How the quantum gravity sensor works

The quantum gravity sensor measures subtle changes in the pulling strength of gravitational fields when a cloud of atoms is dropped. The bigger the object and the greater the difference in density of the object from its surroundings, the stronger the measurable difference in pull.

But vibration, instrument tilt and disruption from magnetic and thermal fields have made turning quantum theory into commercial reality challenging. The Birmingham quantum sensor breakthrough is the first to meet these real-world challenges and perform a high spatial resolution survey. The removal of noise due to vibration will unlock gravity mapping at high spatial resolution. More information about quantum gravity sensing technology.