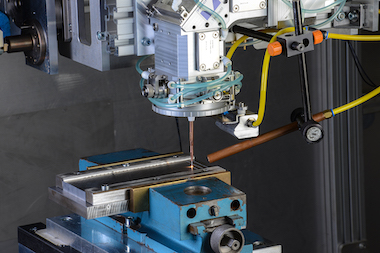 TopCladd, investigating "Adaptive Laser Cladding for Precise Metal Coating Based on Inline Topography Characterization," believes that OCT could in future be used to control the quality of the deposition operation, thus reducing scrap.

The laser deposition operation studied in this case was wire-based laser metal deposition or LMD-w, an additive manufacturing process in which a metal wire used as filler material is welded onto a workpiece in weld beads under the action of a laser. Several of these weld beads next to each other produce a layer, and several layers on top of each other produce a component.

"Since LMD-w only applies material where it is needed, it is a resource-saving process," said the TopCladd project team. "The complex process development and low process stability have so far prevented broader industrial use beyond special repair processes, or the application of wear-resistant coatings."

TopCladd was set-up to investigate routes to improving process stability and quality of LMD-w operations, in particular through inline process monitoring and real-time adaptive feedback control of the laser source.

Low coherence interferometry was identified as a promising candidate, potentially able to carry out inline geometrical measurements of the surfaces produced using an optimized laser cladding head, wire feeding system, process modelling and data processing. Results from the imaging operation would then increase the accuracy of process parameters and decrease the process non-productive time, raising the overall production performance.

Advances in laser sources and sensors have contributed to the current growth in OCT applications, with the global market for OCT devices expected to reach $1.5 billion in 2023. The bulk of that is in biomedical scenarios, where the technique has been readily adopted by ophthalmology clinics in particular, but the advent of smaller and more robust OCT devices is expected to spur applications in consumer devices and industrial applications too.

TopCladd has coaxially integrated an OCT system into the processing head of the laser in a way which allows the machining laser and the OCT system to share common optics but at different wavelengths, an architecture intended to eliminate interference.

A specialized conical lens termed an axicon and prism-shaped optics ensure that the processing and measurement light remains coaxial, according to the project, allowing the measuring laser to circularly scan the applied weld around the centrally running metal wire. This multidirectional measurement can be made independent of the direction that the welding head moves, so the entire workpiece can be measured without the wire blocking the measuring light.

"With OCT, we will be able to apply not only one or two layers on top of each other during laser metal deposition in the future, but any number of layers," commented Robin Day of Fraunhofer IPT's Energetic Beam Processes department. "In this way, LMD-w has been upgraded to a full-fledged and sustainable additive manufacturing process."