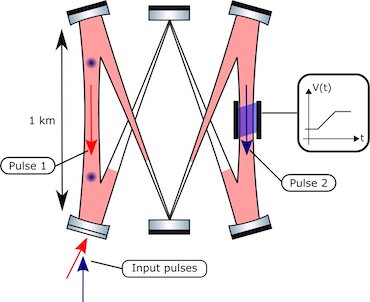 Large-scale atom interferometers, analogous to optical interferometers but measuring the difference in phase between atomic matter waves on different paths, are intended to be key elements in future searches for gravitational waves and dark matter.

Such instruments will effectively monitor different gravitational wave frequencies than existing LIGO instruments, expanding our understanding of the cosmic phenomena that cause them. But the demands on an instrument's performance are substantial.

A project at the University of Birmingham backed by the UK Quantum Technology Hub Sensors and Timing has now demonstrated a method of creating a circulating pulse within an optical cavity of suitable sensitivity without posing insurmountable demands on the laser power needed.

Published in Communications Physics, the research is a step towards delivering an important element needed for operation of kilometer-scale interferometer facilities.

"By overcoming some of the most severe current technological barriers, this original scheme has a real potential to enable disruptive sensitivity levels in large-scale atom interferometers," said Samuel Lellouch from the University of Birmingham.

Atom interferometers rely on laser-induced multiphoton interactions to steer the course of clouds of atoms, one candidate being a strontium isotope that demonstrates a potentially useful 698-nanometer transition already exploited in optical lattice clocks. But creating and maintaining laser pulses to do the job over kilometer-scale instruments has posed several challenges, not least a theoretical optical power requirement in excess of 20 kilowatts.

Optical cavities offer a possible solution, according to the Birmingham team, since resonant power enhancement in such cavities reduces the required input power, although at the kilometer-scale maintaining desired pulse length will remain difficult.

The breakthrough involves synchronization of the input pulses in order to realize a spatially resolved circulating pulse within the project's optical cavity. This can facilitate a large momentum transfer without the need for drastic improvements in available laser power, according to the project's paper.

In trials, the team studied "an example cavity with 1 kilometer baseline and round trip path length of 6 kilometers. This scale is relevant in the context of recent proposals, but in principle the scheme is applicable to any traveling wave cavity."

The instrument was designed to that additional light is coupled into the cavity on each round trip to compensate for losses, and Doppler shifts are countered by correcting the frequency of each pulse when it passes through an intracavity phase-delay component termed a Pockels cell. Using strontium isotopes, the new design was able to sustain pulses with an input laser power of only 16 watts, said to be "the first practical, albeit challenging, approach to the generation of short, high-fidelity pulses on such optical transitions."

Refinements to the principle could allow atom interferometry to be applied in smaller-scale applications, such as providing new tools for navigation through enabling increased resilience against loss of GPS signals. This would be in keeping with the remit of the Hub, one of the quantum research centers set up in 2019 supported by £94 million in UK government funding, and which are intended to ultimately deliver commercial benefits for UK businesses.