Arrays built by Redwire due to be deployed during spacewalks before the end of the year. 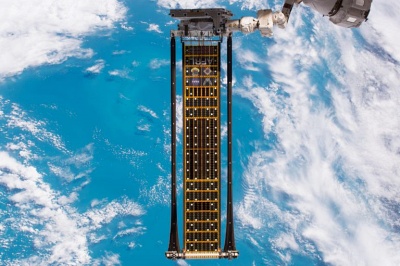 The latest pair of “roll-out” solar arrays needed to increase power generation on board the International Space Station (ISS) have arrived at the orbiting laboratory, following their November 26 launch.

Designed and built by US-based Redwire, and featuring multi-junction solar cells from Boeing subsidiary Spectrolab, the arrays are due to be deployed in a series of spacewalks conducted by astronauts over the next few weeks.

Spacewalk schedule
The new solar arrays, currently rolled up like a carpet prior to their unfurling, are a larger version of the Roll-Out Solar Array (ROSA) technology that was demonstrated on board ISS in 2017.

One pair of “ISS ROSAs” (iROSAs) was deployed in June 2021, while another set is due to follow in the future, meaning that six of the flexible arrays will be operational eventually.

According to NASA, the combination of the eight original, larger arrays, and the smaller, more efficient iROSAs will restore the power generation of each augmented array to approximately the level when the original arrays were first installed.

“The new arrays will be installed during upcoming spacewalks on the space station,” said Redwave, with the original schedule aiming for one spacewalk installation on November 29, and the second on December 3.

However, the later-than-expected launch of the re-supply mission looks to have delayed that plan. After the ISS crew began unpacking the payload, NASA said that astronauts Josh Cassada and Frank Rubio would install the new solar arrays on a pair of spacewalks now targeted to occur before the end of the year.

”The iROSAs will increase power generation capability by up to 30 per cent, increasing the station’s total available power from 160 kilowatts to up to 215 kilowatts,” pointed out Redwave

High-efficiency cells
NASA says that despite being smaller than conventional solar arrays, the higher performance of the roll-out arrays means they can produce more than 30 kilowatts per panel, depending on their exact size. 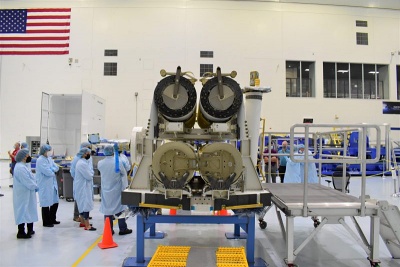 “ROSAs use highly efficient solar cells, and future iterations will even experiment with concentrators to boost its performance,” said the space agency. “Furthermore, the composite booms provide structural rigidity, capable of withstanding a dynamic environment, a range of frequencies, and debris or micrometeoroid collisions, providing reliability for long-duration missions.”

That is because they are based on advanced compound semiconductor structures that are able to capture and convert a much broader range of the sun’s emission spectrum into electrical energy.

Redwire adds that the iROSA technology is compact, modular, and scalable, making it ideal for use on other spaceflight platforms aside from the ISS.

“When installed, each iROSA unit unrolls without the need for motors or other equipment, giving iROSA an advantage over rigid solar arrays and other traditional technologies,” stated the firm.

Medical microscope and dwarf tomatoes
The iROSAs arrived at the ISS as part of a payload lifted by a SpaceX Falcon rocket, and were accompanied by new experimental hardware including a “Moon microscope” intended for in-flight medical diagnosis.

“An astronaut collects and stains a blood sample, obtains images with the microscope, and transmits images to the ground, where flight surgeons use them to diagnose illness and prescribe treatment,” reported NASA.

The ISS is also receiving a new plant growth system called “Veg-05” that will attempt to grow “Red Robin” dwarf tomatoes in orbit. The experimental setup will test the impact that different ratios of red and blue light have on crop yield and taste, in a bid to establish a best practice for growing the fruit in space.