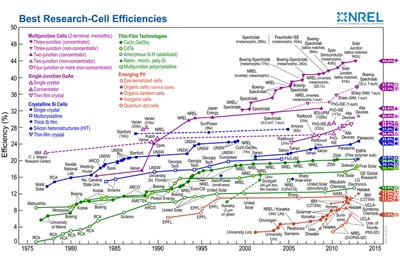 Spectrolab, the subsidiary of Boeing that manufactures advanced solar cells, says that it has set a new world record for photovoltaic cell efficiency under no concentration.

Based on a terrestrial solar spectrum, the cell efficiency was verified by the US National Renewable Energy Laboratory (NREL) at 37.8 percent – pipping the previous best of 37.7% that was set last December by Japan-based Sharp with a triple-junction, inverted metamorphic (IMM) design.

Spectrolab says that the new world-best performance was reached using a “new class” of high-performance solar cells, and according to NREL’s latest chart of record-breaking efficiencies it was a five-junction design.

So-called multi-junction cells are able to capture much more of the solar spectrum than conventional and familiar single-junction cells used in the silicon and thin-film panels that appear in most current rooftop or solar farm installations.

But multi-junction devices based on III-V semiconductor materials are much more difficult to manufacture than silicon cells, and were initially developed for space applications where their high cost could be justified with the much greater efficiency of solar panels used to power satellites.

Under concentration, those cells tend to perform even better. In fact, the current record for any cell is held by Solar Junction’s 44%-efficient triple-junction device, which was verified by NREL under nearly 1000x concentration.

Early days
Although it is very early days for the Spectrolab technology, which features two more junctions that even the most advanced cells currently deployed either in space or utility-scale concentrated PV (CPV) solar farms, it has long been considered possible to reach close to 50% conversion efficiency by incorporating extra junctions.

Troy Dawson, the president of Spectrolab, highlighted the potential utility of such advanced cells in a range of applications in the future, saying: “We expect this solar cell technology will have significant benefits for space, ground-based, and sensor applications."

And Nasser Karam, the company’s VP for advanced technology, believes that there is plenty of headroom to achieve higher efficiencies, saying that it might be possible to reach a figure in excess of 45% under low concentrations.

The Spectrolab mark is the latest in a series of new efficiency records set recently by PV cell, module and panel developers. Just last week, First Solar said that it had produced a cadmium telluride module operating at 16.1%, having in February also set a new best of 18.7% for a CdTe cell.

Through its planned acquisition of TetraSun, First Solar is also diversifying into crystalline silicon heterostructure cells; for that particular sub-type the current efficiency record is 25% - a figure set earlier this year by researchers at Panasonic.

And in the world of organic PV, where production costs should be much lower than for conventional inorganic cells, Germany's Heliatek set a new record of 12% for a tandem device in January this year.

As with any PV technology, whether or not Spectrolab’s five-junction device becomes commercially successful will depend on whether the record-breaking research-level performance can be reproduced in a volume production setting, and at a cost that is suitable for the applications at which it would be targeted.