Single-junction device based on technology being tested by NASA for use in future missions demanding low-mass power. 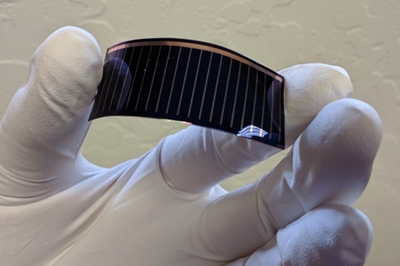 Alta Devices, a specialist in high-performance flexible solar cells, says it has achieved a new world-best of 29.1 per cent conversion efficiency with its single-junction gallium arsenide (GaAs) device.

The milestone, certified by the official test laboratory at the Fraunhofer Institute for Solar Energy Systems (ISE), represents the latest in a long series of cell or module records set by the Californian company, a subsidiary of China’s Hanergy. Earlier this year Alta set a new best of 25.1 per cent for a small flexible module based on the same absorber material.

However, the cell efficiency has improved only incrementally over the past few years. According to the most recent US National Renewable Energy Laboratory (NREL) chart of the highest-performing research-grade cells, the 29.1 per cent figure beats Alta’s previous best of 28.9 per cent – and as long ago as 2011 it had reached 28.2 per cent.

ISS tests
While the record-setting cell is small in scale and not sufficiently developed for commercial use, Alta’s approach is now being tested out by NASA, with an eye on potential deployment in future space missions.

The company’s CEO Jian Ding said: “NASA’s interest in Alta’s record-setting performance demonstrates that our technology withstands some of the most challenging environments endured by autonomous systems in space, high altitude, and on land.”

Its engineers collaborated on an array of nine solar cells featuring innovative packaging materials that were fabricated and delivered to NASA earlier this year. On board the ISS, the solar cells will be installed into a zenith-facing position, and after one year of exposure, they will be returned to NASA and Alta Devices for evaluation. Alta says that, with NASA, its team has developed scientific models to simulate how the solar cells may be affected by their on-orbit exposure.

A final sample evaluation will allow them to refine those models, improving predictions related to cell and package performance for future, longer missions where the cell performance might be affected by oxygen erosion or ultraviolet radiation.

Prism Award nomination
In its early days – and prior to being acquired by Hanergy – Alta had looked to target the then-emerging market of concentrated photovoltaics with its high-performance designs. Co-founded by Caltech’s Harry Atwater and photonic crystal pioneer Eli Yablonovitch, the company raised tens of millions of dollars as it looked to build manufacturing scale.

But the dramatic expansion of low-cost silicon cell production in China put paid to that strategy, and when Hanergy acquired Alta in August 2014 the focus switched to markets such as wearable tech, consumer electronics and the automotive sector.

“By utilizing a very thin layer of material with the highest energy density possible, the amount of material needed is low,” it says. “Therefore potential system costs can be dramatically reduced.”

As well as the interest from NASA, Alta’s recently launched “Gen4 AnyLight” technology has been recognized with a nomination for the forthcoming Prism Awards, for which winners will be announced at a gala dinner during SPIE’s Photonics West event in San Francisco in early February.

With Gen4, the company claims to have achieved a 160 per cent upgrade in power-to-weight ratio over the previous iteration of its technology.