Telescope developed by Fraunhofer researchers from Jena and Freiburg to launch in February 2022. 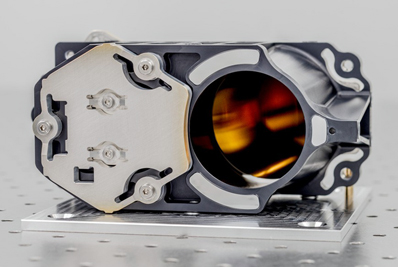 The scope developed by researchers in Jena and Freiburg, Germany.

Researchers from Jena and Freiburg have jointly developed a new type of mirror telescope for use on the International Space Station ISS. The findings that the measuring instrument will provide there in the future should, among other things, provide answers to climate change and facilitate the efficient use of water in agriculture.

The instrument will begin its journey into space in February 2022. The development of the telescope was funded by the Digital Innovation Hub Photonics, a Thuringian initiative to promote start-up projects in the fields of optics and photonics.

In the struggle against climate change, and to enable a more efficient management of water resources in the future, the Fraunhofer Institutes for Applied Optics and Precision Engineering in Jena, and High-Speed Dynamics, Ernst-Mach-Institut, in Freiburg, have teamed up with the companies Spaceoptix and ConstellR – both spin-offs from the Fraunhofer-Gesellschaft – to develop a novel mirror telescope.

The telescope is part of a measuring instrument that will measure the planet’s water cycle from the International Space Station ISS. A thermal infrared camera will be used to measure the land surface temperature of our planet. The measuring instrument is a forerunner of a constellation of so-called microsatellites that will provide even more comprehensive data in the near future.

New, meaningful and diverse data from Earth observation are now indispensable for making early and reliable predictions about crop yields, for example, due to the difficult-to-predict effects of climate change.

For cost-effective realization of these constellations, a swarm will consist of very small satellites, so-called microsatellites about the size of a shoebox. These are powerful and resilient thanks to the ongoing miniaturization of the necessary technology.

With the realization of a satellite constellation in the thermal infrared spectrum, ConstellR, which is based in Freiburg and a spin-off of Fraunhofer EMI, has set itself the goal of closing a relevant gap in Earth observation: “In this spectral range, surface temperature can be measured very precisely as a key variable in the description of our environments,” said Marius Bierdel, CTO of ConstellR. “This knowledge can be used, for example, to monitor the water requirements of crops in agriculture and use it to predict accurate crop yields.” 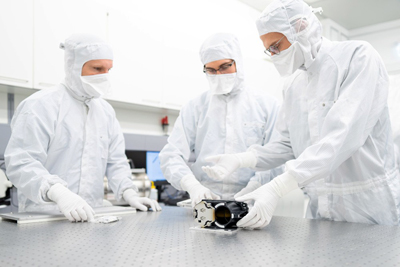 Funded by the German Federal Ministry for Economic Affairs and Energy, the first step on the way to the planned constellation, ConstellR technology will be deployed on the International Space Station ISS in spring 2022. Among other things, the optical part of the measuring instrument, consisting of a metal telescope with freeform mirrors, will be demonstrated during the mission.

The design of the opto-mechanical telescope was developed at Fraunhofer IOF. “The institute has a wealth of experience in the development of high-performance optics for use in space,” said Dr. Matthias Beier, CEO of Spaceoptix.

“The production of the mirrors, the telescope structure as well as the mechanical structural components of the opto-mechanical total payload took place in our own manufacturing facilities. As a spin-off of Fraunhofer IOF, we specialize in the series production of metal optics for space applications.”

The project for developing the telescope was funded by the pilot project “Digital Innovation Hub Photonics” (DIHP), an initiative supported by the Free State of Thuringia to promote start-up projects in the fields of optics and photonics.

Head of DIHP, Dr. Sebastian Händschke, commented, “This cooperation and the presented result are a very good example of the intention of DIHP and teaming up with spin-offs.” The two start-ups ConstellR and Spaceoptix had each won €50,000 in research funding at DIHP's second Elevator Pitch in January 2020, which has now been used to develop the free-form mirror telescope at Fraunhofer IOF.