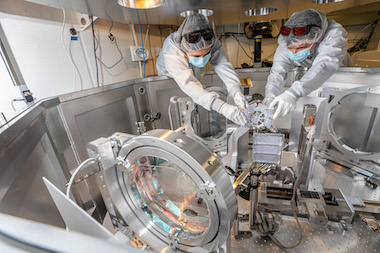 A new addition to the Berkeley Lab Laser Accelerator (BELLA) Center at California's Berkeley Lab is designed to expand the center's capabilities into new areas of high intensity laser science.

The upgrade, after a two-year installation process, has created a new experimental area to be known as Interaction Point 2 (iP2), that will use the lab's petawatt laser to provide intense pulses of protons and ions. This will build on the center’s expertise in accelerating electrons and lower energy protons.

"We're ushering in a new era of high-intensity laser experiments," said Cameron Geddes, director of Berkeley Lab’s Accelerator Technology and Applied Physics (ATAP) Division. "This is a great milestone that broadens the whole science reach of the facility and the possibilities for our field."

The BELLA laser system, originally built by the Thales Group, is designed to provide 40-joule laser pulses of 40 femtoseconds duration at a repetition rate of 1 hertz, as well as 10 to 60 terawatt systems at 10 hertz. The laser architecture employs a chirped-pulse amplification approach, in which energy from a dozen pump laser sources is stretched, amplified and compressed with the aid of titanium sapphire crystals to generate high-power femtosecond pulses.

Studies at BELLA have recently included development of a method to control the position and pointing angle of such high-power laser beams with minimal interruption or disturbance, by diverting a tiny part of the beam onto a parallel path and applying measurement instruments to that "witness beam."

Researchers are planning to use the new iP2 for a range of research projects. One of the first, according to Berkeley Lab, will explore the creation of proton bursts for FLASH radiotherapy, an approach in which cancer cells are exposed to short intense bursts of radiation.

In 2020 researchers using BELLA’s original interaction point, iP1, saw promising results when applying protons from BELLA to thin layers of cells in Petri dishes. They now plan to use higher energy protons to study the FLASH effect in thicker skin and tumor tissue.

"We are investigating the potential of using these laser-accelerated protons for radiotherapy, which would require significantly higher proton energies to penetrate deep into the human body," said Lieselotte Obst-Huebl who led the installation work at iP2. "This is basic research and is in its infancy, but it could potentially someday be a powerful tool in our toolkit."

An upgrade to BELLA also expands opportunities for researchers based elsewhere, through the Center's participation in the LaserNetUS network. Created in 2018 by the US Department of Energy, LaserNetUS brings together nine institutions to make high-intensity lasers more accessible for use in science and engineering. Researchers can now submit proposals through LaserNetUS to conduct research at the BELLA Center and take advantage of the expansion at iP2.

"People can bring detectors and new targets and get supported by our team here," said Kei Nakamura, associate deputy director for experiments at the BELLA Center. "They can propose pure acceleration experiments or applications of accelerated particle beams. Topics we don’t even know now will be happening in the future."