Stock price up as combination of legacy II-VI and Coherent businesses forecast to generate more than $5 BN in annual sales. 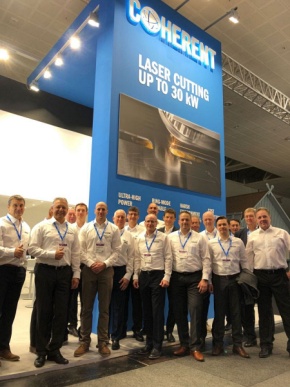 Coherent, the highly diversified photonics company created in July from a merger of II-VI and the legacy laser-focused Coherent business, has posted sales of $1.34 billion in its first trading quarter.

Investors reacted positively to the update, which included expectations of full-year revenues in the region of $5.45 billion, sending the company’s stock price up nearly 15 per cent in trading immediately following the announcement.

Irreversible megatrends
Company CEO Chuck Mattera said that the firm was already benefiting from “irreversible megatrends” across various industry sectors, with the combination bearing fruit in the form of larger sales accounts thanks to the rapid integration of sales and service functions associated with the two legacy businesses.

“We’ve hit the ground running together, and haven’t skipped a beat since,” he said, also pointing out that sales attributable to the legacy II-VI business were up 20 per cent year-on-year in the quarter ending September 30.

And although lingering supply-chain issues did restrict sales in the quarter by around $60 million, the CEO stressed that the company would be largely unaffected by the escalation in tensions between the US and China that has seen additional restrictions on the sale of semiconductor manufacturing equipment.

Following the merger, Mattera and his executive team have arranged the new Coherent business around three large reporting segments: networking, lasers, and materials.

They delivered sales revenues of $597 million, $392 million, and $356 million respectively in the latest quarter.

Prior to the merger, the legacy II-VI business was relatively exposed to fluctuations in demand from the communications market, which accounted for around two-thirds of company revenues.

But the latest figures highlight how much more diverse the company is now. Even though communications still represents the firm’s largest single market area, it accounted for 45 per cent of sales in the September quarter. Industrial, electronics, and instrumentation contributed 39 per cent, 6 per cent, and 13 per cent respectively.

OLEDs and micro-LED potential
In industrial applications, Mattera pointed to the ongoing strength of the semiconductor capital equipment market - particularly for extreme ultraviolet (EUV) tools - alongside solid customer demand for displays production equipment as two key areas for the business.

The legacy Coherent business is a key provider of excimer lasers for display backplane annealing applications, with the company benefiting from regular service revenues ensuring that the huge excimer systems are well maintained.

But the firm also leads the way in laser equipment for critical “lift-off” processing steps, while ultrafast lasers are expected to find serious demand in organic LED screen production over the next five years, as the technology migrates to laptop and tablet formats.

The CEO also said that production of new “micro-LED” displays would require yet more lasers, claiming that Coherent was already engaged with more than 25 active customers, and had just installed its first revenue-generating tool at a customer site in Asia.

Another strong area for Coherent is 3D sensing, where sales of its vertical cavity surface-emitting laser (VCSEL) arrays have surged in recent quarters thanks to key customer Apple’s decision to diversify its supplier base.

“We grew total share by out-performing our competition in time to market,” Mattera commented. According to recent figures from the market research company Yole Intelligence, II-VI has dramatically increased its VCSEL market share in recent years, largely thanks to its acquisition of Finisar and deployments in Apple phones.

$500M R&D budget
Following the completion of the Coherent merger on July 1, the company says it has already implemented measures saving the company $12 million in annual costs - with that total expected to rise to $250 million within three years.

One target of those “synergy” savings is to make research and development more cost-effective, although Coherent claims that its combined annual spending of around $1 billion on R&D and capital expenditure will represent the highest total in the photonics industry.

According to the latest figures, R&D expenditure in the September quarter totaled $121 million.

Overall, the company now employs some 28,000 people, spread across no fewer than 130 locations in 24 different countries stretching (alphabetically) from Albania to Yemen.

Discussing the latest developments in an investor conference call, CEO Mattera emphasized the company’s efforts to reduce its carbon footprint - pointing out that 35 of its locations, including all 26 in Europe, were powered by renewable energy.

Adding that the merger had brought together a “huge and diverse” pool of talent, he said: “We adopted the name Coherent because it has the universal meaning of bringing things together. We have the opportunity of a lifetime in front of us.”

• Coherent’s outlook of full-year sales growing to between $5.25 billion and $5.55 billion for the 12 months ending next June - with the total depending more on supply-chain issues than anything else - appeared to surprise the market, with the firm’s stock price initially rising in value by around 15 per cent.

Although those gains were subsequently pared back, the Nasdaq-listed share price closed at just over $32 on November 9, up 7 per cent on the day.