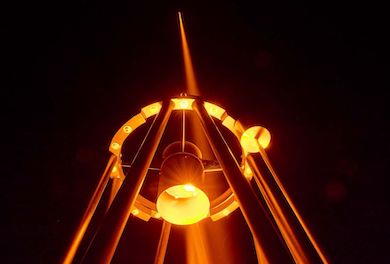 The European Southern Observatory (ESO), together with laser companies MPB Communications, Toptica Potonics and High Finesse, have announced that a novel 63W CW experimental guide star laser has passed its field-testing procedure at the AVSO observatory, in Bavaria. The field tests included laser frequency chirping and were performed under Toptica’s coordination.

The guide star laser is a key component ultimately intended for the ESO’s CaNaPy Laser Guide Star Adaptive Optics test facility. The CaNaPy experimental facility, an ESO-lead project in collaboration with institutes and industry, is to be installed at the ESA Optical Ground Station in Tenerife, Spain, in the framework of an ESO-ESA collaborative effort to share technological developments.

Trials at the Allgaeuer Volkssternwarte Ottobeuren observatory west of Munich confirmed that the laser's high power output and chirping system are on course to help improve the sharpness of astronomical images taken with ground-based telescopes, according to Toptica.

Toptica's research into guide star technology has now been underway for over a decade, with the company winning a contract to develop a new type of laser for the European Southern Observatory (ESO) in 2010, building on the company's experience in narrow-band tunable diode lasers, frequency stabilization and frequency doubling.

Building on this success, the company spun out its Toptica Projects subsidiary in 2017 to take over then-current and future guide star laser activities at Toptica.

The same year Toptica reached agreement with the ESO for the production of lasers to be used in the adaptive optics system of the Extremely Large Telescope (ELT) also in Chile. The first guide star laser system was delivered to that installation in May 2021, potentially the first of eight such systems at the site. ELT is expected to achieve first light in the second half of this decade.

Guide star lasers are used to excite sodium atoms at 90 kilometers altitude in the Earth's atmosphere, creating artificial local point light sources that can be used to map and correct for atmospheric turbulence.

Toptica's stated intention with its SodiumStar platform, developed in collaboration with fiber-laser supplier MPB Communications, was to create a guide star laser platform emitting over 20 watts of narrow-linewidth radiation at specific sodium resonance wavelengths, but which did not require labor-intensive daily alignment or lengthy system warm-up times.

"In contrast to the currently used dye or solid-state laser systems which rely on a stationary laser clean room at the observatory facility, the SodiumStar can be directly integrated into the telescope structure with its gravity-varying condition," according to Toptica SodiumStar data.

The platform's experimental frequency chirping system, developed by Toptica Projects and the ESO, is one key element of the architecture. Chirping, in which the laser's tuned frequency is rapidly altered, can increase the number of sodium atoms excited by the laser, making the artificial star brighter and improving the turbulence correction. Toptica has already installed a chirping module prototype on the ESO CaNaPy laser.

"Once the technology is installed at the Optical Ground Station in Tenerife, a collaborative project between ESO and ESA, it will provide both organizations with opportunities to advance the use of laser guide star adaptive optics technologies not only for astronomy but also for satellite optical communication," commented Toptica.