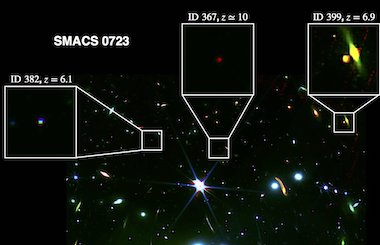 Images captured by the James Webb Space Telescope (JWST) using its MIRI instrument have shown details of galaxies dating from when the universe was only about 1 billion years old.

The observations represent a significant step forward in mid-infrared studies of the extragalactic background sky, as well as confirming that the MIRI instrument "works even better than was thought," according to the JWST team.

As discussed in a forthcoming Astrophysical Journal paper, the results show the value of observing deep-field galactic images at 7.7 microns wavelength as a tool to probe the high-redshift universe, and study the period termed the epoch of reionization when the first stars and galaxies arose.

Until now researchers have relied on infrared images from the Spitzer Space Telescope, which was able to look back to about 2 to 3 billion years after the Big Bang.

"You might think the 1 billion years off by Webb doesn't matter that much," said lead author Edoardo Iani from the University of Groningen. "But you arrive right at the time when the first galaxies were formed. So we are very happy with our findings."

MIRI, or Mid-Infrared Instrument, was developed by a consortium including the European Space Agency and NASA's JPL to cover the 5 to 28 micron wavelength band. Its imaging mode samples a 1.7 x 1.3 arcminute field of view with 10 filters, while a coronagraphy mode employs four coronagraphs to identify exoplanets orbiting distant stars. It also carries a spectrograph to carry out medium-resolution spectroscopy over a smaller field of view compared to the imager.

This arrangement requires three arsenic-doped silicon detector arrays, cooled to a temperature of 7K. The sensors were developed by Raytheon Vision Systems, with a cryogenic cooling arrangement provided by a combination of a pulse tube pre-cooler and a Joule-Thomson loop heat exchanger.

For the new findings researchers also studied complementary data from the JWST's NIRCam instrument, which employs mercury-cadmium-telluride detector arrays to cover an infrared wavelength range of 0.6 to 5 microns.

Studies of the SMACS 0723 cluster of galaxies located in the southern constellation of Volans at 7.7 microns wavelength allowed the astronomers to calculate the stellar masses of stars in the cluster, using a lensing model in which multiple images can be used to obtain the mass distribution of objects in the field of view. Results showed that the stellar masses spanned a range from 107 to 1011 times the mass of the Sun.

The performance of the MIRI instrument and the effects of gravitational lensing, whereby light from faint sources is deflected by nearer ones, allowed the JWST infrared images to reveal galaxies that had not previously been discovered. Astronomers could then more accurately calculate how many stars were present in those very young and very distant galaxies, building on existing but less accurate data from the Hubble Space Telescope.

The findings demonstrate the enormous potential of MIRI to open up the study of the high-redshift universe at mid-IR wavelengths, according to the project.

"Maybe it will allow us to penetrate a bit into the dark ages," said Karina Caputi of the University of Groningen. "When we designed the MIRI instrument, we had secretly hoped that we would achieve that, but now it looks like it's actually going to happen."