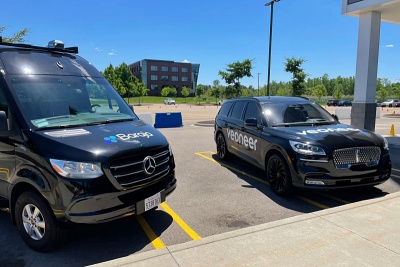 Baraja, the Sydney, Australia, firm that has devised a novel lidar technology based around wavelength-tunable lasers, says it has signed a deal with a major automotive manufacturer that should see the hardware deployed in vehicles.

The startup company’s “Spectrum-Scan” technology has recently been the subject of tests with partner Veoneer, a major provider of car parts headquartered in Sweden.

Baraja says it has entered the latest agreement alongside Veoneer, with the aim of accelerating the scale-up in production required for automotive integration.

“The advanced development agreement is a major step forward for automotive integration of the Spectrum HD25 product, bringing together world leaders in automotive safety and demonstrating Spectrum HD25 has Tier One, OEM and partner support,” announced Baraja.

“Generational leap”
Describing Spectrum HD25 as a “generational leap” for automotive lidar, Baraja says that the technology is based on its proprietary Spectrum-Scan solid-state scanning platform.

When the company emerged from stealth mode back in 2018, it revealed that the novel approach was based on tunable lasers emitting around the telecommunications wavelength of 1.5 µm.

Founded by Federico Collarte and Cibby Pulikkaseril - engineers who previously worked at the optical communications component giant Finisar - the idea was to use components and technologies that were already mature, volume-produced, ultra-reliable and low cost, thanks to their extensive use in optical telecommunications.

“Using a tunable semiconductor laser and dispersive optics is very low complexity if you think about it compared to other solid-state technologies,” said Collarte at the time.

Baraja says that Spectrum HD25, the latest iteration of that approach, is able to utilize the inherent advantages of a Doppler system without the trade-offs of higher costs usually associated with frequency-modulated continuous-wave (FMCW) lidar that is able to capture both the position and velocity of other road users.

According to the Sydney firm, it is able to deliver a range in excess of 250 meters with a wide field of view, from a compact system combining the laser transmitter, receiver, and fast-axis beam steering components on a single, integrated, wafer-scale package.

“This is a big milestone for Baraja as we continue to solidify the power of our technology for automotive scale. Our ongoing partnership with Veoneer and cooperation with a global car company have been instrumental in our success and we look forward to all that's to come in the near future.”

Emil Hällstig, who has executive responsibility for lidar products at Veoneer, commented in a joint release from the companies:

“Veoneer initially chose to partner with Baraja after extensively evaluating 70 lidar technology companies globally. Baraja was selected based on the robust technology and product roadmap that lends itself to be[ing] among the smallest-size lidar technology to enable large-scale vehicle integration.

Backed by the likes of Sequoia, Blackbird Ventures, Hitachi Construction Machinery and Main Sequence Ventures, Baraja raised $32 million in a series A round of financing in late 2018, and followed that up with a $31 million series B effort last year, shortly before embarking on the collaboration with Veoneer.