To take over from earlier Sentinel, supplying images for applications ranging from monitoring decline of Earth’s ice to food security. 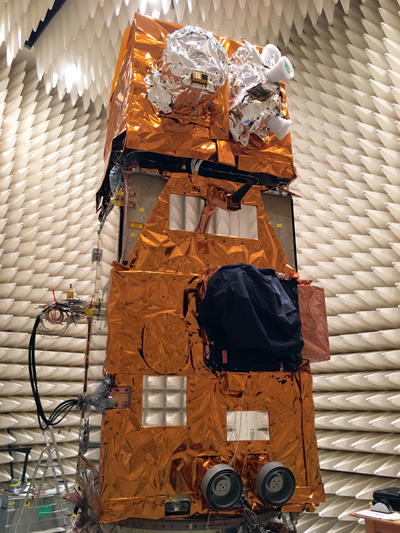 With the first Copernicus Sentinel-2 satellite in orbit since 2015 and the second since 2017, European Space Agency (ESA) engineers are now preparing the mission’s follow-on pair to eventually supply images for applications ranging from monitoring the decline of Earth’s ice to food security.

Scheduled for launch in 2024, Sentinel-2C has just started a five-month testing program to ensure that it is fit for its life in space. The Sentinel-2 satellites each carry an innovative high-resolution multispectral imager, which combined with their 290 km-wide swath and frequent revisit times, offer unprecedented views of Earth.

The mission provides information mainly for agricultural practices and for tackling the global issue of food security. Images can be used to determine leaf area chlorophyll and water content indexes, for example. These data are particularly important for effective yield prediction and applications related to Earth’s vegetation.

However, over the last six years, the mission’s data have also been used to monitor changes in ice sheets and glaciers, coastal erosion, deforestation, burnt land resulting from wildfires, pollution in lakes and coastal waters, and more.

The mission is based on a constellation of two identical satellites in the same orbit, 180° apart for optimal coverage and data delivery. So, when Sentinel-2A retires, Sentinel-2C will be there to take its place, and eventually Sentinel-2D will replace Sentinel-2B. This pairing guarantees the continuation of data delivery on which many Copernicus Services users rely.

Engineers at Airbus Defence and Space in Friedrichshafen, Germany, have spent the past four months preparing the satellite by integrating its all-important multispectral imager instrument, and have now transported it to IABG’s facilities in Ottobrunn.

Constantin Mavrocordatos, ESA’s Copernicus Sentinel-2 project manager said, “We are thrilled that Sentinel-2C is now ready to be fully tested. Airbus has done a spectacular job fitting the whole satellite out, especially during these difficult Covid times, which has led to some different ways of working to ensure all the restrictions are respected.

“The satellite arrived safely in IABG where it was unpacked, checked that all is well after its short road trip from Friedrichshafen and was installed in the cleanroom for series of exhaustive tests that will run until Christmas.”

The program includes a range of mechanical tests that simulate the noise and vibrations of liftoff, tests that check that the satellite deploys its solar wing correctly, other tests that place the satellite under the extreme temperature swings it will experience in space, and electromagnetic compatibility tests to measure radio frequency radiation levels generated by the satellite and to verify the correct operation of the satellite equipment.

Once all this has been completed, Sentinel-2C will be transported back to Friedrichshafen for some final checks before being placed in storage to wait until it is time to ship it to the launch site in French Guiana. Liftoff is envisaged to take place in early 2024.