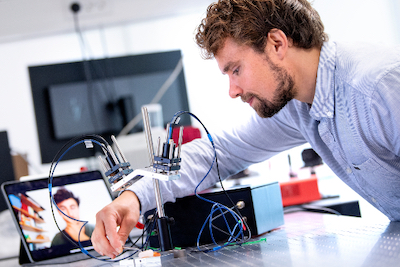 DTU (Technical University of Denmark) and fishing firm Royal Greenland have collaborated on a new optical technology that can measure the thickness of the ice glaze on frozen prawns.

Its developers say this is an important factor in ensuring that the prawns stay fresh and consumers get the right quantity of prawns.

The solution is based on terahertz waves, and the technology can be used to measure the thickness of innumerable materials. Simon Lehnskov Lange, a postdoc at DTU Fotonik, leads a research team that is developing a compact and inexpensive device for quick and efficient measurement of the thickness of all kinds of materials.

The idea is to utilize a specific type of electromagnetic waves called terahertz radiation. This radiation can penetrate many different substances, and — at the transition between two different materials — part of the radiation is reflected and forms a small echo.

Niels Bøknæs, a process developer at Royal Greenland explained the importance of ensuring an even layer of ice on the frozen prawns: “Glazing protects the prawns from rancidness, i.e. from drying out and unwanted chemical changes. As long as the prawns are frozen, it’s not so much about food safety, but more about quality and taste.”

“We glaze by spraying water from nozzles on the deep-frozen prawns. We’ve found out that 10-12 per cent water covers the prawns well. But in the industrial glazing process, the glazing is done with differences in process parameters.

“Maybe the water from the water nozzles is slightly too hot or cold, and the size of the prawns may vary a little. This means that the glazing thickness is not completely constant, and it’s really a challenge to control the glazing content in the practical production,” he said. 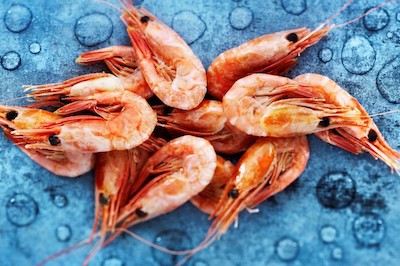 Measuring the thickness of ice on prawns is just one possible application.

Ice weight must be excluded

Ice-glazed food products are typically sold by weight, and the ice weight must not be included. As the prawns are only weighed after the glazing for technical reasons, it is, however, important for the manufacturer to know exactly the quantity of ice used.

Today, Royal Greenland manually checks the glazing percentage using a time-consuming and impractical method. The company would rather have a system in which the glazing thickness is measured continuously, allowing automatic adjustment in real time.

“We ran a small pilot project in which we glazed some prawns, and we discovered that we were able to measure the ice thickness, which is typically between half a millimetre and one millimetre,” said Lehnskov Lange.

“So we agreed to try it out on a slightly larger scale. We brought a system to Royal Greenland’s factory in Aalborg, Denmark, where we validated the technology and demonstrated that we can measure prawns of all sizes and types—also under the prevailing conditions in such a factory. We’re now patenting the method for measuring ice glazing thicknesses on foods,” said Lehnskov Lange about the results from the research project, which is named GLAZE.

Measuring the thickness of ice on prawns is just one possible application of the technology. The DTU scientists say this technology is also applicable to many different industries, for example for continuous control of the quality of other surface treatments.

Lehnskov Lange commented, “We’re initially looking at food inspection, where we’ve now started to study other uses, for example measuring the thickness of eggshells.” A thick eggshell means a solid egg that can withstand the journey all the way to the consumer or that can protect the fetus until the chicken is hatched.

But it will be a while before the DTU technology is ready for the market, he added. “We started with a system that cost 1.5 million Danish kroner [$235,000]. If we’re to use the technology in the food industry, the price of our terahertz system must come down significantly.

“We’re now working on a demonstration model that is much smaller and designed to make it profitable for companies if we can get the technology mass-produced. We hope to have such a model ready for testing by the end of 2021,” he said.