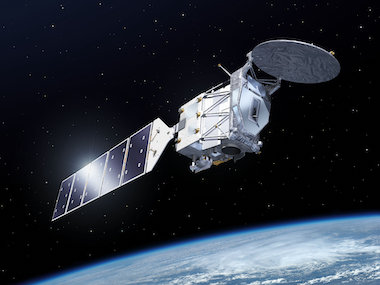 The Earth observation (EO) programs of the European Space Agency now include activities that cover the entire spectrum of the EO domain, and the data collected will continue to make a significant contribution to Earth science.

That was the message from Pierluigi Silvestrin, head of the Future Systems Department in the Agency's EO Program Directorate, during a plenary session at SPIE Remote Sensing.

The ESA currently has 15 EO satellites in operation, with a further 39 under development and 12 at the initial preparation stage. Its program includes a family of present and future Earth Explorers (EE) missions, assessing a range of key geoscience parameters. "These missions are the pillar of our activities," said Silvestrin.

Four of the five EE missions launched since 2009 are still in operation today. They include CryoSat, which uses interferometric synthetic aperture radar (SAR) to measure the thickness of polar sea ice and monitor changes in the ice sheets; and Aeolus, carrying the first space-based Doppler wind lidar system to measure horizontal wind profiles in the troposphere and stratosphere.

Filling in the knowledge gaps

One of them, EarthCARE, a European/Japanese collaboration scheduled for launch in 2023, will carry a multi-instrument payload including an atmospheric lidar, or ATLID, platform able to assess the vertical profiles of clouds and aerosols through UV pulses directed down from orbit, alongside a multi-spectral imager.

"We have significant knowledge gaps concerning cloud and aerosol distributions," noted Silvestrin. "Observing their 3D distributions will be a key contribution to improving our understanding of climate change."

Missions currently at an earlier stage of preparation could see a pair of new satellites carrying SAR instruments take up formation around one of the existing Sentinel-1 craft, combining their SAR data with the older satellite's radar to monitor deformation and flow dynamics of glaciers. The same Harmony pair will also carry thermal-infrared instruments to study cloud movements.

The ESA also envisages six new Sentinel missions, adding to the Copernicus program under which the current Sentinels operate and expanding the study of climate change, biodiversity, food security, and sea temperature.

Among them is CO2M or the Copernicus Carbon Dioxide Monitoring mission, which will employ three spatially co-registered imaging spectrometers for "the first European effort to measure how much carbon dioxide is released into the atmosphere specifically through human activity," said Silvestrin.