$9 billion observatory will be shipped to French Guiana launch site via Panama Canal. 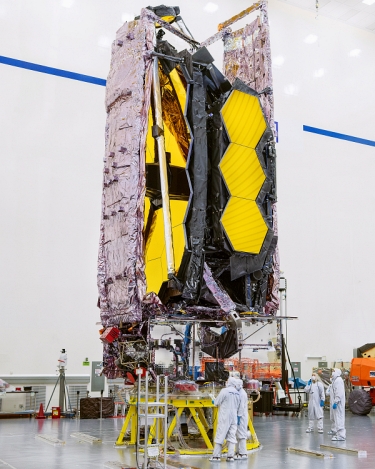 NASA and the European Space Agency (ESA) have confirmed that they now plan to launch the James Webb Space Telescope (JWST) on December 18.

The new launch date, pushed back a couple of months from October, should represent the last of the delays that have plagued the project from the outset.

An international partnership between NASA, ESA, and the Canadian Space Agency (CSA), the telescope itself is expected to arrive at ESA’s launch site in French Guiana by the end of this month - after travelling from Long Beach, California, via the Panama Canal.

Yesterday ESA confirmed that the upper stage of the Ariane 5 rocket that will carry the observatory into space had arrived safely in Kourou on September 3.

Perseverance project
Conceived as a follow-up to the Hubble Space Telescope but with a much larger mirror and far superior infrared imaging capability, JWST’s original budget was “only” $500 million and the observatory was initially pencilled in for launch in 2007.

But after a major redesign, a ballooning budget, and, for a time, the very real threat of cancellation by US Congress, astronomers are finally set to witness the most powerful space telescope ever built fired towards its destination, the second Lagrange point (L2).

After separation from the Ariane 5, JWST will take four more weeks to reach L2, a point in space 1.5 million kilometers from Earth in the direction away from the sun.

L2 is not a fixed point, but instead follows Earth around the sun in a stable orbit - from where JWST’s sunshield will block light and heat from the sun on one side and look into space from the other.

From L2, the telescope and its four major instruments are expected to capture unprecedented images of the cosmos, from galaxies on the edge of the known universe and distant Earth-like exoplanets, to richly detailed views of objects that are much closer to home.

“[JWST’s] revolutionary technology will explore every phase of cosmic history - from within our solar system to the most distant observable galaxies in the early universe, and everything in between,” stated NASA.

“[It] will reveal new and unexpected discoveries, and help humankind understand the origins of the universe and our place in it.”

Is it a bird? Is it a plane? It's #MNtoucan reaching @EuropeSpacePort with @ariane5 elements for the @ESA_Webb / @NASAWebb launch!
More details here: https://t.co/sEYFTbaKRO pic.twitter.com/P4EozsZCNd