Mission to filter sunlight in earth’s surroundings to monitor damage to the ozone layer. 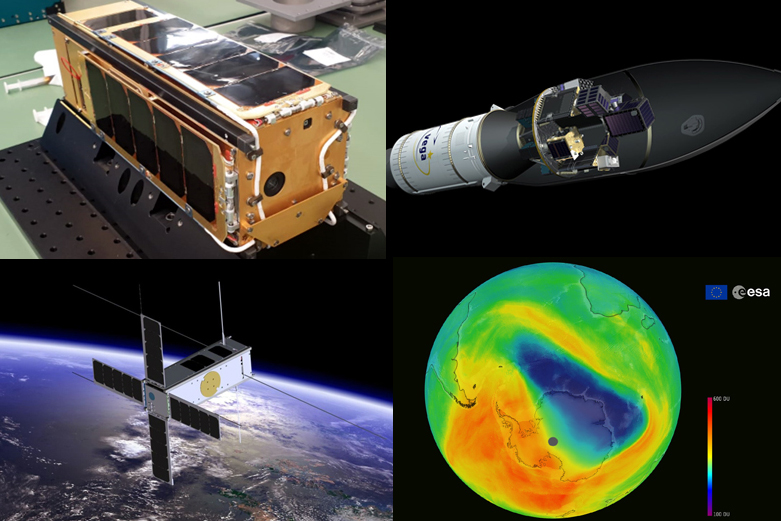 At any given time somewhere around the world, there is always a sunrise and sunset occurring. Soon the European Space Agency’s (ESA) newest CubeSat – taking off aboard Europe’s Vega launcher this Friday, June 19th (at 05.15 CEST) – will be keeping watch. The miniature PICASSO mission is intended to use the filtering of sunlight by Earth’s atmosphere to monitor the protective ozone layer.

CubeSats are miniature satellites built up from standardised 100mm-sized boxes. The PICo-satellite for Atmospheric and Space Science Observations, or PICASSO, developed for ESA by the Belgian Institute for Space Aeronomy (BISA), is a three-unit CubeSat with two scientific payloads. It hosts a cut-down spectrometer for monitoring the atmosphere, as well as sampling probes to measure space plasma around the nanosatellite.

“PICASSO is an experiment, basically,” said project scientist Didier Fussen, heading the Solar Radiation Department at BISA. “Can an instrument providing valid scientific measurements of the ozone layer, which is a vital parameter for the health of life on Earth, be accommodated on a platform the size of a shoe box? The answer turns out to be yes.

“To make it happen we’ve worked with our partners AAC Clyde Space, in Scotland, which constructed our CubeSat, and VTT Finland, which provided us with a suitably scaled-down spectrometer.

“Meanwhile, colleagues at BISA contributed a quartet of homemade Langmuir probes to take advantage of this flight opportunity. Extending from the solar panels of the nanosatellite, these SLP probes will sample variations in space plasma across PICASSO’s orbit, opening a new window on space weather.”

Dr. Fussen continued, “The other essential elements enabling the mission have been financial support from BELSPO, the Belgium Science Policy Office, the UK Space Agency and the Belgian National Lottery, as well as the technical backing from ESA: CubeSats are small in scale, and use commercial off-the-shelf parts to boost affordability, but for scientific purposes their overall complexity is starting to approach that of a standard-sized mission.”

Focused on the study of the upper atmosphere, BISA has contributed instruments to many other satellites over the years, in particular by proposing the forthcoming ESA Earth Watch mission Altius which will monitor the ozone layer and upper atmosphere across a much wider spectral band, but PICASSO is the Institute’s first CubeSat mission.

The impetus for global ozone monitoring from spaceborne instruments goes back to the mid-1980s, and the shock discovery of a hole in the ozone layer by Antarctic scientists, subsequently confirmed by satellite data. The finding that the ozone layer was being eroded by human-made gases was bad news because it plays a vital role in shielding life from harmful ultraviolet radiation.

In parallel to the international prohibition of chlorofluorocarbon gases responsible for the damage, a new generation of ozone-monitoring instruments were designed and launched, many of which BISA contributed to. For instance, ESA’s 2002-launched Envisat environmental satellite alone carried three such atmospheric sounders.

“The result was something of a golden age for ozone monitoring with a good vertical resolution,” added Dr. Fussen, “but this is now coming to an end as most missions reach the end of their lives. So PICASSO will serve as a demonstrator of the capacity of small satellites to perform monitoring of atmospheric composition. Current trends suggest the ozone hole is gradually stabilizing or recovering, but we cannot simply hope for the best. Atmospheric dynamics has a large natural variability year on year, which demands ongoing observation.”

PICASSO’s spectrometer operates on the basis of the solar occultation method, a sophisticated version of “spot the difference”. It compares the spectral signatures of sunlight shone through the atmosphere with sunlight coming directly through space to perform vertical mapping of ozone concentration profiles.

Observing sunrises and sunsets twice per orbit, the CubeSat will also attempt an experimental method of taking the temperature of the upper atmosphere. “As we image the solar disc,” said Dr. Fussen, “we will measure how it has been compressed by the lensing effect of atmospheric refraction, making it smaller and less circular. From this ‘angular size variation’ it is possible to calculate the density of the air at high altitude, and from that derive its temperature.”

PICASSO has been supported through the “fly” element of ESA’s General Support Technology Programme, readying promising technologies for space. It will be launched along with dozens of other CubeSats and small satellites aboard the inaugural flight of ESA’s Vega Small Spacecraft Mission Service, launching on June 19th.