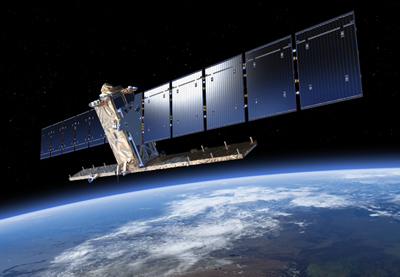 Now in orbit: Sentinel-1B joins its twin for earth scanning.

After two days’ delay due to adverse weather conditions, the second Sentinel-1 satellite – Sentinel-1B – was successfully launched at 23:02 CEST on Monday April 25 on a Soyuz rocket from Europe’s Spaceport in Kourou, French Guiana. The satellite is intended to provide more “radar vision” for Europe’s environmental Copernicus program.

Sentinel-1B will join its identical twin, Sentinel-1A, in orbit to deliver information for numerous services, from monitoring ice in polar seas to tracking land subsidence, and for responding to disasters such as floods.

ESA’s Director General Jan Woerner commented, “The launch of Sentinel-1B marks another important milestone as this is the first constellation we have achieved for Copernicus. Orbiting 180° apart, the two satellites will optimize coverage of the earth and data delivery for services that are making a step change in the way our environment is observed and managed.”

Both satellites carry an advanced radar that images Earth’s surface through cloud and rain, whether it is day or night. During the launch, the satellite’s 12m-long radar antenna and two 10m-long solar wings were folded up to fit inside the Soyuz rocket’s protective fairing. The solar wings and radar open together in a sequence takes about 10 hours to complete.

The ESA commented that now that Sentinel-1B has been placed safely in orbit, the team of controllers at the agency’s operations center in Germany will verify that everything is working as expected before commissioning the satellite for operations. 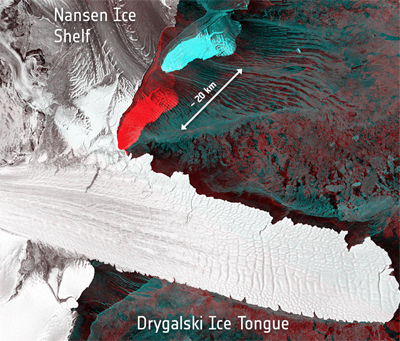 Sentinel 1A image: the birth of two icebergs in April 2016.

Volker Liebig, ESA’s Director of Earth Observation Programmes, said, “We have seen some marvellous results from Sentinel-1A. Only two weeks ago, for example, it captured images of large icebergs breaking away from Antarctica’s Nansen ice shelf.”

“Given that Antarctica is heading into winter now and daylight hours are getting shorter, radar images are vital to see what changes are taking place,” he added. “With Sentinel-1B in orbit we will collect double the amount of data and achieve complete global coverage in six days. This is the fourth satellite that we’ve launched for Copernicus in just two years and this launch is certainly a special moment because it completes the Sentinel-1 constellation.”

The launch of Sentinel-1B has also provided an opportunity to give other smaller satellites a ride into space. Three CubeSats were also carried by the latest launch. These relatively small satellites, each measuring just 10×10×11 cm, were developed by teams of university students through the “Fly Your Satellite!” program, run by ESA’s Education & Knowledge Management Office in close collaboration with several European universities.

The CubeSats are: OUFTI-1 from the University of Liege, Belgium, e-st@r-II from the Polytechnic of Turin, Italy, and AAUSat-4 from Aalborg University, Denmark. Piero Galeone, ESA’s Head of the Tertiary Education Unit, commented, “This programme is helping to educate the next generation of scientists and engineers by transferring ESA knowhow in designing, building, testing, launching and operating satellites.

“This way we are helping to shape the space workforce of the future by enabling students to experience the full lifecycle of a real space project according to ESA’s standards.” Yet another satellite that piggybacked on the launch is called Microscope, which is developed and managed by the French space agency, CNES.