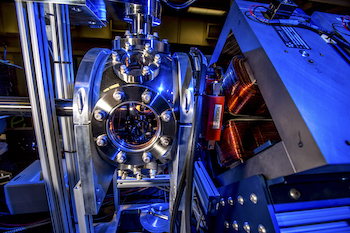 Lumitron Technologies, a California-based developer of X-ray systems based around laser-Compton technology, believes that its HyperVIEW imaging system will deliver new capabilities for high-fidelity imaging and low-dose radiography.

As honed at LLNL over the last decade, laser-Compton light source technology produces mono-energetic gamma rays and X-rays through the collision of an electron beam and a laser beam. According to LLNL, the peak brightness of a laser-Compton light source pulse can be 15 orders of magnitude beyond any other man-made light, in the million-electron-volt (MeV) spectral range.

Lumitron is based at the University of California, Irvine, a location offering synergy with the Beckman Laser Institute and UCI Applied Innovation, and intends to develop laser-Compton light sources with monochromatic 100 keV-class X-ray outputs comparable to those from large-scale synchrotrons. The nature of these X-rays should allow both enhanced resolution in the resulting shadowgraphs and significant reductions in dosage, compared to current imaging and therapeutic modalities.

One significant development enabling the laser-Compton concept to be made more compact and operate at high flux, both important for its potential viability in clinical settings, has been the high-gradient X-band radio-frequency accelerator technology which LLNL and the SLAC National Accelerator Laboratory have jointly developed.

"The technology being developed at Lumitron is based on an extensive set of IP from LLNL, for which I am the sole inventor on 80 percent and co-inventor on 20 percent," commented Chris Barty, Lumitron CTO and formerly of LLNL. "There have been two previous attempts to bring laser-Compton sources to market, but none based on the LLNL technology, which offers dramatic advantages in terms of reduced size, increased performance and scalability to high-energy photon output."

A new frontier for medicine

Conventional clinical X-ray systems operate on principles similar to the original technology demonstrated by Wilhelm Röntgen, in which a beam of energetic electrons is focused onto a metal anode to create the X-rays. The resolution of the resulting shadowgraphs depends on the electron spot size, typically greater than 500 microns, with an effective X-ray spot size of around 600 to 800 microns. 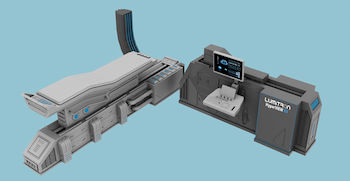 "In a laser-Compton source, the effective X-ray spot size is set by the focal spot size of the laser used in the collision with the electron beam, and in principle can be of the same order as the wavelength of the light," said Barty.

This in turn opens up some new avenues for imaging and treatment, including a technique called two-color subtraction imaging. If X-ray images are taken both just above and below the energy needed to ionize the innermost electrons in an atom of a contrast agent introduced into the sample, then subtracting the two images produces an image primarily of the contrast agent itself. The cross-section for absorption of X-rays changes by almost an order of magnitude around this threshold, called the k-edge, which means that the X-ray dose needed can be reduced accordingly.

"Like many applications that we will pursue, this subtraction imaging technique has been demonstrated at synchrotron devices, but never pursued commercially because of the impracticality of taking patients to synchrotrons," said Barty. "But in the late 1990s the Stanford Synchrotron Radiation Laboratory demonstrated that X-ray coronary angiography, examining the blood vessels around the heart, could be done with iodine contrast agents at dramatically lower dosages, if k-edge subtraction imaging was used. Compare this with standard coronary angiography, which can expose the patient to a year’s X-ray dose in one sitting."

Originally founded in 2013, Lumitron has said that it significantly passed its fund-raising goals and expects to close its capital raise beyond the initial maximum target before the end of 2018. At present the company anticipates delivering its first HyperVIEW units to customers in 24 months, with applications in industrial imaging or security expected to develop alongside medical uses.

"We see this as a pivotal moment in imaging," commented Bruce Tromberg of the Beckman Laser Institute. "As this technology becomes a reality, our teams are excited to work alongside Professor Barty and Lumitron to explore the implementation possibilities. There is little doubt that this represents a new frontier for medicine."