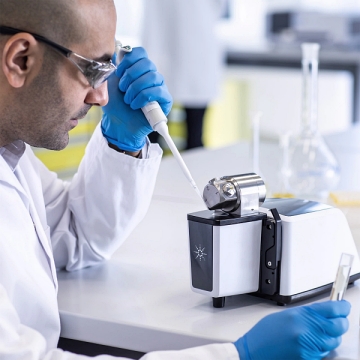 Researchers in India and Australia say that a simple and rapid blood test using infrared spectroscopy is able to help clinicians identify hospital patients with Covid-19 who are most likely to suffer severe symptoms requiring intensive care.

In a small-scale study using a Fourier Transform infrared (FTIR) spectrometer from analytical equipment firm Agilent Technologies, the team was able to observe subtle spectral differences in samples from severe and non-severe patients.

The results from 130 samples were used to train an algorithm that was then tested “blind” on 30 patients.

When combined with other factors including age and existing co-morbidities like diabetes and high blood pressure, the approach identified most of the patients who went on to suffer from severe symptoms.

And although the FTIR triage did also generate a significant number of “false positive” results - patients who did not become as severely ill as the algorithm predicted - the researchers suggest the test’s accuracy can be improved, and that it should help hospitals to prioritize patients, especially in developing countries.

Spectral changes
Michelle Hill, head of Queensland Institute of Medical Research (QIMR) Berghofer’s Precision and Systems Biomedicine Research Group, and co-author of a paper in the journal Analytical Chemistry describing the study, explained in a release from Agilent:

“We found there were measurable differences in the infrared spectra in the patients who became severely unwell. In particular, there were differences in two infrared regions that correspond to sugar and phosphate chemical groups, as well as primary amines, which occur in specific types of proteins.”

Although the precise biological reasons for those spectral changes are yet to be deduced, the relative simplicity of the approach - compared with more expensive cytokine panel tests - means that it could be particularly useful in low-resource settings.

“A simple, rapid test at the point of patient admission would transform hospital management during crises,” stated the team.

Another co-author of the paper, Sanjeeva Srivastava from Mumbai’s Indian Institute of Technology Bombay, added:

“We also found that having diabetes was a key predictor of becoming severely unwell in this group of patients, so we fed clinical parameters such as age, sex, diabetes mellitus, and hypertension into the algorithm.”

When tested on blood samples from a separate group of 30 patients the algorithm was found to have a specificity of 69.2 per cent, and a sensitivity of 94.1 per cent when predicting which patients would become severely ill.

Srivastava points out that this means it yielded more false-positives than predictions that are based solely on the clinical risk factors of age, sex, hypertension, and diabetes.

“We hope that with more testing, we can reduce these false positives,” Srivastava said.