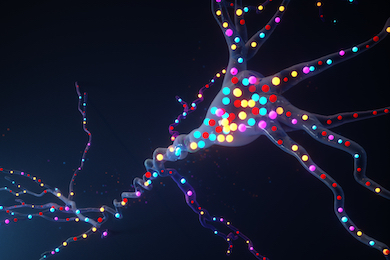 Fluorescence imaging offers a window onto the dynamics of individual molecules within cells, thanks to ability of genetically encoded fluorophore probes to emit light when specific biochemical changes occur.

Intracellular signals involving calcium ions are particularly useful as triggers for fluorophore emission, but researchers are increasingly keen to use multiple fluorescent reporters of different signals within the same cell.

A project at MIT led by Ed Boyden from the Synthetic Neurobiology Group has now developed an imaging technique able to image up to five different molecule types at a time, a valuable step towards visualizing the complex signalling networks that control cell functions. The work was published in Cell.

"Typically a biologist can see one or two colors at the same time on a microscope, and many of the fluorophore reporters out there are green, because they’re based on the green fluorescent protein," said Boyden. "What has been lacking until now is the ability to see more than a couple of these signals at once."

The work builds on Boyden and MIT's prior work on controlling the expression of fluorescent proteins by cells in neurons, a line of research which led to the burgeoning field of optogenetics in which Boyden is recognized as one of the pioneers.

In the new study, Boyden and colleagues used this technique to identify two populations of neurons that respond to calcium signals in different ways, a difference in behavior which may influence how they encode long-term memories.

"On a conventional fluorescence microscope, reporters with different fluorescent spectra can be used simultaneously but not reporters based on the same fluorophore, whose signals will mix and result in ambiguous data," noted the team in its Cell paper.

"If it were possible to assemble fluorescent reporters of different biological signals into distinct clusters randomly located throughout a given cell, distant enough from each other to be resolved by a microscope but close enough to spatially sample the relevant biology, it might be possible to image more biological signals in a single living cell than permitted by the number of spectrally resolvable channels on a microscope."

This approach required the researchers to modify existing reporters so as to cause them to accumulate in individual clusters at different locations within a cell, accomplished by the addition of two small peptides to each fluorophore reporter. Fusing different reporters to different pairs of self-assembling peptides compelled them to stochastically cluster at different points in space, separated by micron distances, according to the project.

Once each cell contained hundreds of clusters of fluorescent reporters, measuring the changing fluorescence of each one allowed the project to identify which molecule was being measured in each cluster, by preserving the cell after the live imaging and staining for the peptide tags that are unique to each reporter.

This approach distinguishes the different signals for different molecules, even though they may all have been fluorescing the same color in the live cell. In trials on neurons and brain slices from mouse hippocampi, the technique proved able to see five different molecular signals in a single cell, according to MIT.

To demonstrate the potential usefulness of this strategy, MIT measured the activities of three molecules in parallel: calcium, a messenger molecule called cyclic AMP, and the enzyme protein kinase A (PKA). These three form a signaling network involved with many different cellular functions, including the strengthening of connections between neurons thought to be involved in learning and forming memories.

The project was able to identify two novel sub-populations with different calcium signaling dynamics in these networks, one slow and one more rapid. This heightened response from some molecules may help sustain long-lasting changes in the neurons, changes associated with brain functions.

The next steps will be to apply this approach in living animals to study how signaling network activities relate to behavior, and expand it to other types of cells such as immune cells. Ultimately the technique could also allow comparisons of signaling network patterns between healthy and diseased tissue.

"There are thousands of molecules encoded by the genome, and they’re interacting in ways that we don’t understand," commented Boyden. "Only by watching them at the same time can we understand their relationships."