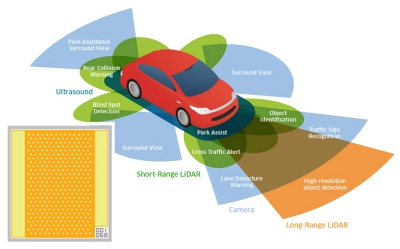 The stock price of major photonics company Lumentum has dropped in value by more than 15 per cent, after the company missed its revenue target in the latest financial quarter.

The San Jose firm said that it had deferred sales of directly-modulated lasers (DMLs) worth $15 million from the March quarter “out of an abundance of caution”, as a result of delayed 5G wireless infrastructure deployments in China.

That meant sales revenues were pegged back to $420 million for the three months ending March 31, below the range of $425 million to $440 million forecast back in February.

Investors may also have been disappointed by the company’s outlook for the June quarter and beyond, with CEO Alan Lowe and his team predicting a sequential decline in sales to somewhere between $360 million and $400 million.

Pointing out that despite the revenue shortfall Lumentum was still able to deliver strong profit margins, Lowe said:

“Between our product and technology portfolio, our design-wins with market leading customers, and the positive changes in our business model and the industry over the past several years, I believe the future continues to be very bright at Lumentum.”

Termination fee boosts profits
On the bottom line, Lumentum’s net income received a major boost thanks to the one-off payment of a merger termination fee worth $218 million. That payment was triggered when the company’s bid to acquire Coherent was trumped by rival II-VI.

As a result, Lumentum was able to post a bumper pre-tax income of $253 million for the quarter, compared with $43 million in the equivalent period last year.

Commenting on the merger termination, Lowe expressed his disappointment with the outcome and said Lumentum’s management has now decided to invest some of the firm’s cash in internal development - by way of a new $700 million share buy-back program just authorized by the board of directors.

While not ruling out another significant acquisition, the move was described by CFO Wajid Ali as the “perfect balance”, as it still leaves plenty of financial firepower and flexibility if another opportunity does arise.

Multi-junction VCSEL arrays
Another key area where Lumentum is competing with II-VI is in 3D sensing applications with VCSELs. Lumentum emerged as a leading provider of the technology three years ago, and has now shipped close to one billion units. Apple, whose adoption of the technology for the iPhone proved pivotal, accounted for 26 per cent of Lumentum sales in the firm’s most recent fiscal year.

However, with Apple now diversifying its supplies through a new deal with II-VI, Lowe told investors that the overall market for lasers used in 3D sensing applications was likely to shrink by around 20-25 per cent over the next year, before bouncing back as new applications in automotive and machine vision markets become more significant.

Although the Android environment has proved tougher to crack - one major customer unexpectedly decided not to include 3D sensing in its latest product - some opportunities in handsets are still apparent.

“We recently had an important Android customer launch a mobile phone with time-of-flight 3D sensing camera capabilities enabled by our lasers,” pointed out the CEO.

“This is a notable design win as this customer is a large and leading supplier of camera components, and their features frequently proliferate to much higher-volume Android manufacturers.”

Lowe also highlighted the firm’s new multi-junction VCSEL components, which produce higher powers and are being aimed at emerging applications beyond phones.

“These multi-junction arrays are of particular interest to the automotive and lidar markets,” he said of the 5- and 6-junction devices, launched during SPIE's Photonics West event. “They have strong traction in solutions for autonomous vehicles, including the major retailers who are looking to deploy fleets of autonomous delivery vehicles.”

5G delays
Turning to the subject of 5G infrastructure deployments in China, Lowe pointed out that the ongoing political stand-off between the US and China was a key factor behind the current delays - with the additional problem of electronic component shortages.

Photonics-based products from Lumentum and others are required to support the 5G roll-out through optical networks and data center upgrades to handle the additional traffic, but the delay will now cause something of a drag on the firm’s sales revenues.

China had previously been expected to deploy huge numbers of 5G base stations across the country in 2021. However, that total has been revised down significantly, and although Lowe thinks that the rate of deployment will pick up again over the summer, high levels of inventory already delivered to customers mean that Lumentum is unlikely to see a pick-up in business until the start of next year.

“I'd say it's solely due to the US-China geopolitical issues and their ability to get chips for the base stations,” the CEO told investors.

As a result of those 3D sensing and telecom trends, Lumentum’s overall sales in the second half of calendar 2021 are expected to be around 5 per cent lower than the same period last year.

• Following Lumentum’s update, the company’s stock price dropped in value by more than 15 per cent on the Nasdaq. Currently trading at around $68, it has fallen around 30 per cent within the space of three weeks, partly on wider fears that electronic component shortages will push up inflation.