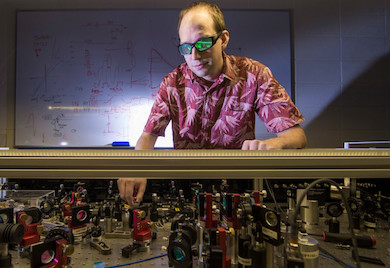 Moon and beyond: laser communications

Two projects at Canberra's Australian National University (ANU) relating to the use of lasers in space applications have been announced.

Funded by the Australian government via the Australian Space Agency, the projects are intended to help test new technologies involved in future space exploration.

Both funding awards are Demonstrator Feasibility Grants under the Moon to Mars Initiative, intended to support Australian businesses and publicly funded research organizations with space projects that will showcase the country's science efforts.

O2O is designed to test laser communications systems for use with the Orion manned spaceflight vehicle. "As we strive to put humans on Mars for the first time, it's imperative that we develop a communications system to support these activities at the highest level possible," commented NASA's Don Cornwell when the O2O demonstrator project was initiated.

The ANU project, backed by $200,000 of funding and in partnership with Liquid Instruments, intends to demonstrate the feasibility of high-speed optical communications between Earth and the Orion spacecraft as it orbits the Moon.

Once assembled, this instrument will be transported to the university’s Quantum Optical Ground Station, under construction at the Mt. Stromlo Observatory in Canberra. The goal is for the instrument to provide Southern Hemisphere ground support for the O2O mission from 2024 onward.

"The next space technology leap is going to be to laser communication, so this research will help enable that here in Australia," commented ANU's Francis Bennet. "This will enable more advanced technologies to travel further into space and transmit information back."

A second grant of $106,000 will support development of laser measurement technology for the next stages of NASA's Gravity Recovery and Climate Experiment (GRACE) program.

The first GRACE mission was launched in 2002, involving twin satellites monitoring changes in the local pull of gravity caused by changing seasons, weather and climate processes. A successor gravity sensing mission, GRACE-Follow-On, was launched in 2018.

GRACE employed a microwave ranging system to precisely monitor the distance between the two satellites, but GRACE-Follow-On trialed a laser interferometer designed to do the same task, potentially improving the precision of range fluctuation measurements by a factor of at least ten.

The new project, between ANU and partners CEA Technologies, will build on that trial to develop a space-ready laser measurement system for the next generation of GRACE missions, scheduled for launch in the mid-2020s.

"The GRACE missions make global measurements of water motion, revealing effects of droughts on groundwater and aquifers and ice caps evolution over years and decades, crucial to understanding the effects of our evolving climate," said Kirk McKenzie of ANU.

"This is an important first step to upgrade inter-spacecraft laser ranging, measuring the distances between spacecraft within millimeters via lasers. It will also allow us to contribute to crucial Earth observations."