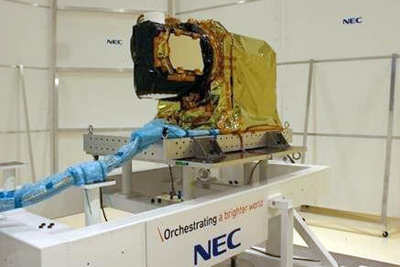 Japan Aerospace Exploration Agency (JAXA) and NEC recently announced the launch of LUCAS on board the Optical Data Relay Satellite, which was sent into or orbit last month from JAXA’s Tanegashima Space Center in Kagoshima, Japan, using an H-IIA rocket.

The LUCAS system pushes the performance envelope in terms of data rates and latency, with the aim of offering near real-time availability of satellite data. G&H says the use of its “pioneering” system will show how laser communications can be a viable solution for future high-speed and scalable space communications.

Based on G&H’s undersea terrestrial communications capabilities as its starting point, the LUCAS system takes the company’s fiber optic systems and photonic technologies into space. Two types of laser communication systems have been developed: one for geostationary satellites and one for earth observation satellites deployed on a low Earth orbit (LEO).

The LUCAS system has two optical amplifier systems, designed and manufactured by G&H, which create an all-optical bidirectional link between geosynchronous orbit and LEO satellites. A high-power amplifier system boosts the optical signal level before it goes out into space. A low-noise amplifier is used at the receiver side to amplify the very weak signals after having propagated in space across tens of thousands of kilometers.

Both optical amplifier systems are manufactured in G&H Torquay and include novel fiber-optics, space-grade laser electronics in addition to NEC-manufactured digital electronic boards for telemetry/tele-command.

Stratos Kehayas, G&H Chief Technology Officer, commented, “The amplifier system launched is packed with G&H technology. A testament to the power of vertical integration, we used our unique component base in Torquay, UK and Boston, USA to develop novel and high-performing space photonic systems for satellite laser communications.

“To the best of our knowledge this is the first time 1.55 µm optical fiber amplifiers have been deployed in the GEO orbit. We also created the necessary space-grade system manufacturing and assembly procedures and applied these in world-leading, purpose-built cleanroom facilities in Torquay, UK to manufacture these amplifiers.”