Guidance for 2021 raised as both revenue and order intake increase significantly.

Between April to June, this year, order intake almost doubled compared with the prior-year period, revenue was up by almost 30 percent, and EBITDA by 120 percent, the company announced this week.

The company’s statement highlighted “good development in the Light & Optics division, especially in the semiconductor equipment and biophotonics areas and by Trioptics, the results of which are consolidated for the first time.” In addition, the company said it had seen recovery in the automotive industry.

The statement added that the company’s Executive Board “now assumes that the existing guidance for revenue and EBITDA margin will be exceeded. In addition, a one-off effect in the EBITDA of €16 million in connection with variable purchase price components from the acquisition of Trioptics is expected to contribute to the margin increase.”

The company’s revised guidance means it now anticipates an increase in revenue to €880 to €900 million for the fiscal year 2021 (previously revenue growth in the low double-digit percentage range), and an EBITDA margin of between 19.0 and 19.5 percent (previously EBITDA margin of 16.0 – 17.0 percent). Jenoptik’s Interim Report on the first half of 2021 will be published on August 11. 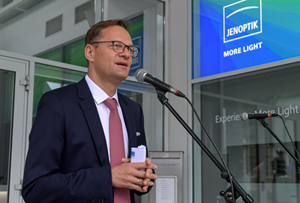 • On July 15th, Jenoptik announced that Marposs will acquire its grinding machines metrology business and take control of all Jenoptik employees at the main site in Peseux, Switzerland, as well as in Ratingen and Ludwigsburg, Germany, 40 people in total. In 2020, the Jenoptik business generated revenue of around €7 million.

With this sale, Jenoptik said it is focusing more strongly on those metrology areas in which the group is well positioned on the global market, and is divesting smaller, highly specialized, non-optical activities in its Light & Production division.

Jenoptik’s President & CEO Stefan Traeger commented, “We have found a partner and new owner for the process metrology business in the Marposs Group. As a global supplier and metrology specialist, Marposs offers very good development opportunities for this unit," said.

• On July 6th, Jenoptik announced that its crystal growth business will be sold to Hellma Materials, which is taking on all 25 employees, and continuing all business activities. Financial details were not disclosed.

Jenoptik's crystal growing activities are bundled in Photonic Sense, based in Eisenach, Thuringia. The division produces blanks from optical germanium and silicon are the base material, such as for infrared optics.