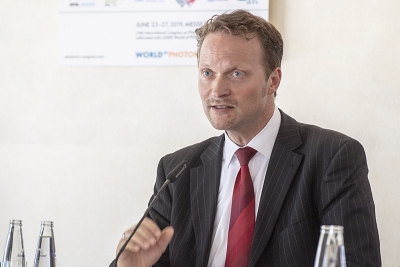 Photonics companies in Germany are expecting to see a sharp increase in sales revenues this year, as the world emerges from the coronavirus pandemic.

According to the latest survey by the SPECTARIS industry group, which represents around 1000 companies in the country, sales should rise 14 per cent this year, to reach nearly €46 billion.

Speaking at the LASER World of Photonics Industry Days conference taking place online this week, SPECTARIS’ managing director Jörg Mayer said that although German photonics companies had been very pessimistic at the start of the pandemic, sales in 2020 were not impacted as much as feared.

In the end, the German photonics industry recorded only a 1 per cent decline in sales on the record-breaking figure of €40.6 billion for 2019, Mayer added.

Larger companies were less badly affected, with small companies registering a 12 per cent decline in terms of domestic sales in 2020. However, this did not impact the overall picture too much, since more than 70 per cent of German photonics sales are exported.

Employment up
Unsurprisingly, the SPECTARIS survey also found that the vast majority of companies had adapted working methods as a result of the pandemic, with around half expanding their digital sales channels.

Less surprising, perhaps, was the finding that only a small minority of photonics companies in Germany had looked to add or replace existing suppliers during the pandemic - reflecting a lower degree of disruption than had been feared.

Employers have also chose to hold onto their workforces, partly as a result of a long-standing shortage of skilled labor required by the industry. In fact, employment within the sector actually increased slightly last year, to around 167,000 workers - very close to a forecast made by SPECTARIS and others back in 2013.

That total is expected by SPECTARIS to rise steadily to around 185,000 by 2025. However, Mayer warned that companies may struggle to fill those positions due to the lack of skilled workers - something that the industry group is lobbying to influence amid forthcoming elections in Germany.

The longer-term outlook for sales revenues looks bright, with Mayer predicting average annual growth of around 6 per cent. If correct, that would see German photonics company revenues hit €59 billion by 2025.

China disruption
The rate of growth is similar to that anticipated by Photonics21 and market research partner Tematys in their latest outlook for the sector.

They are anticipating that the global photonics market will rise from around €650 billion to some €900 billion by 2025, with opportunities growing fastest in the agriculture and food, defense, and communications sectors.

At the moment the European share of that global total stands at just over €100 billion - meaning that German companies account for 40 per cent of the business in the region.

However, the European photonics market remains highly fragmented, with Mayer highlighting the unusual state of affairs in which SMEs continue to dominate the sector.

Of the estimated 5000 photonics companies in Europe, more than 80 per cent employ fewer than 100 people, he pointed out.

The latest Tematys figures also show the growing influence of China, whose share of the global photonics market rose from 25 per cent in 2015 to 29 per cent in 2019.

That was at the expense of companies in Taiwan, Japan, and Korea, explained Mayer. However, more significant disruption between Europe and China could result from recent Chinese legislation. “[It’s a] real threat to business we want to do in China,” Mayer warned.