$5M round supports plan for a 16-satellite constellation providing global thermal and multispectral coverage on a daily basis. 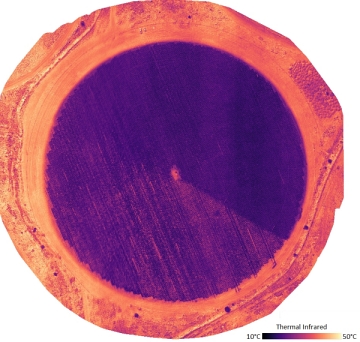 The Washington, DC, data analytics firm Hydrosat says it has raised another $5 million in seed funding that will go towards establishing a constellation of infrared imaging satellites.

The company, whose total funding now stands at $10 million, is due to launch its first multispectral and thermal imagers in a tie-up with Loft Orbital scheduled for 2022.

However, in the longer term it plans to launch an additional 16-satellite constellation with the capacity to scan the entire globe on a daily basis.

Hydrosat CEO Pieter Fossel said in a release from the company: “This investment will allow us to further our mission of addressing food security, water scarcity, and climate risk by unlocking the power of thermal infrared data from space.”

Fossel also suggests that the support will enable the firm to build on its existing government business - including contracts with the European Space Agency and the US Air Force - with commercial products for customers working in agriculture and analytics.

Executive experience
“While other commercial satellites rely on tasking to be able to image small areas for customers with reservations, Hydrosat is building a high-capacity satellite system to collect data continuously over wide areas,” states the firm.

The latest seed funding, led by Cultivation Capital, also sees three new executives join the company’s board of directors. One of those is the former NASA Deputy Administrator Lori Garver - now CEO of the satellite imaging and climate change think-tank Earthrise Alliance.

Honored to join the board of this stellar team developing satellites to measure climate impacts of water stress on vegetation for management of crop & agriculture resources & fire prevention.@HydrosatI raises $5 million in seed funding round - SpaceNews https://t.co/yaaSDPnSP6

Garver said: “Hydrosat is positioned to do for Earth sciences what SpaceX did for launch, which is to offer a high-quality, commercial capacity for government and commercial users.”

Geospatial expert Andy Dearing, a general partner at Cultivation Capital, is another new same on the Hydrosat board - and thinks that the company’s technology should help to mitigate the impacts of drought.

“Water stress is one of the most widespread and pressing challenges with climate change, and we believe that Hydrosat is uniquely positioned to address this,” he said.

Also joining is Ryan Johnson, CEO of the Berlin-based agriculture satellite constellation RapidEye, which was sold to Planet Labs (now known simply as “Planet”) in 2015.