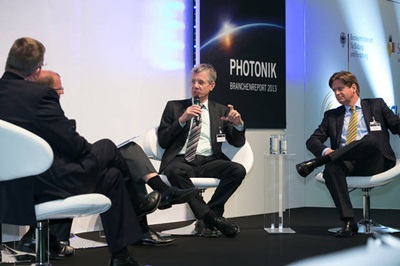 The German photonics sector will employ 165,000 people in the country by the end of the decade, according to a market and industry study presented by Photonik Forschung Deutschland at the LASER World of Photonics trade show in Munich.

According to the study, which was prepared by market analysts at the German Engineering Federation (VDMA), Spectaris, industrial laser vendor Rofin-Sinar and elsewhere, the sector employed 134,000 people in 2011 – the year that the Photonik Forschung Deutschland funding program was launched, also at the LASER event.

The program began officially at the start of 2012, with around €100 million in funding available over its first four years. According to figures released by the organization, it has so far attracted €136 million in funding for some 256 different projects.

The VDMA had previously estimated the 2011 jobs figure at just under 120,000, but the higher figure also includes those with jobs at directly related supplier industries.

The 134,000 figure suggests that the photonics industry has created around 30,000 new jobs in Germany since 2005, with a similar number set to be added through 2020 as the industry grows at a compound average rate of 6.5% per year.

PV impact
The study also sizes the global photonics market for 2011 at some €350 billion, up from €228 billion in 2005. The analysts predict “solid growth” for the rest of the decade, and estimate that the 2020 market will be worth €615 billion.

And despite the current problems faced by the photovoltaics (PV) industry, it is still predicted to grow at a more rapid rate than the wider market. The report says that in 2005 PV represented only 4% of the global photonics market (equivalent to €9.1 billion), but that proportion grew to 14% in 2011 as the sector boomed (€49 billion).

By 2020, it will have doubled in value from 2011 and account for 16% of the market, or €98 billion – with only the Asia-dominated displays sector representing a higher proportion.

Germany’s domestic production of photonics is said to have reached €27 billion in 2011, up from €17 billion in 2005. Despite the dominance of German companies in some parts of the photonics business, that 2011 figure represented only 8% of the total market - China and Japan led the way with equal shares of 21%.

With the recent upheaval in the PV industry, which has seen a huge shift of production away from Germany and towards China, those figures will have already changed. By 2020 the analyst team believes that Germany will have seen its share of the PV sector’s value drop to just 5% of the total, with a similar story in light sources.

The only two major sectors where Germany is expected to increase its market presence are production technologies, where a 20% share is anticipated by the end of the decade, and biophotonics and medicine.