University of Arizona-developed holographic light collector boosts panel efficiency by 5% over a year. 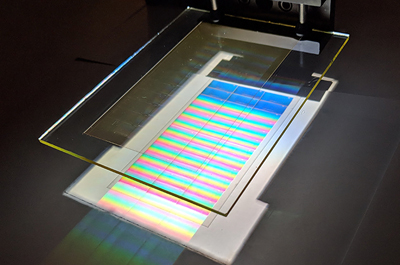 Holograms inserted into standard solar panels can capture significant lost energy, adding upwards of 5 percent extra yield, a University of Arizona engineering team says. With the global market for solar panels projected at up to $200 billion, that increased yield could play a big role in solar economics.

In this novel approach, a hologram functions as a low-cost light collector that can boost efficiency at energy conversion, reducing the cost and number of panels needed for a home or a city.

The collectors make use of inactive areas, including space used to connect a panel’s cells. Other inactive areas can be due to irregular solar cell shapes within the panel. The holograms are prerecorded and laminated into the solar module during packaging. The individual hologram size, shape and spacing are matched to specific cell configurations within the module.

The approach is the latest breakthrough from a researcher at the University of Arizona, Raymond Kostuk, a professor of electrical and computer engineering with a joint appointment in the UA’s James C. Wyant College of Optical Sciences. Some of his testing was done in the sunny courtyard of the Electrical and Computer Engineering Building in Tucson. Other testing involved use of a solar simulator in the lab.

With the solar panel global market projected to reach into hundreds of billions in the next five years, the prospect of up to a 5 percent boost in efficiency could attract significant attention. “Solar cell people get excited about just tenths of a percent improvement in efficiency,” Kostuk said. “If you have a few percent improvement, that’s going to catch people’s interest.”

In short, he says, the greater the amount of area left unused in a panel, the more potential benefit from diffracting unused sunlight onto the active PV cell areas by the hologram. Kostuk’s analysis showed the holograms were able to transfer sunlight to the solar cell that is normally lost in part by using the module’s glass cover as a wave guide.

This resulted in improvements to annual energy yield that could vary from 3.8 percent to 4.5 percent, depending on the amount of inactive area of the PV module surface and whether single axis tracking is used. “The goal is to extract more of the available optical solar illumination that hits a standard solar module,” said Kostuk. “It lets more sunlight be converted to energy.”

Some types of solar panels would benefit more than others, Kostuk said. There would be less benefit for the most efficient solar modules, for example, the top-ranked panels by SunPower, with less unused area. In those panels, he said, all the contacts are vertical, between cells, or on the back of cells, leaving less opportunity to benefit from the holography approach.

One drawback to the holography is a potential 20 to 30 percent increase over current costs for the traditional solar module. But the payoff from a 5 percent improvement could still be considerable, based on the findings of Kostuk’s research team, for panels at the lower end of the cost spectrum.

“If a given module is now operating at 20 percent efficiency, with the holographic collection layer it would then become 21 percent efficient overall,” said Kostuk. “Realistically, that is where the thinking about this collection idea is at.”

The holographic optical element is situated between PV cells.

In Tucson, AZ, Prism Solar Technologies has developed an assembly manufacturing capability to introduce holograms into solar panels, said Kostuk, who was a consultant for Prism Solar. When the cost of silicon was increasing, it made sense to use holograms to reduce the amount of silicon required for panels, but when silicon costs went down the company moved away from that technology.

In recent years, at least one company, in Phoenix, Arizona, has obtained patents on a manufacturing method to include holography film in a photovoltaic module.

Kostuk is currently working with the UA’s technology transfer office on invention disclosure paperwork for the holography approach to solar panels. His research was supported by the QESST Engineering Research Center, which is, in turn, sponsored by the U.S. National Science Foundation and the U.S. Department of Energy.

The big question, of course, is cost: “Is incorporating the hologram, worth it? That’s another story,” said Kostuk. “It’s a business decision on whether somebody wants to do that. All of this is very cost sensitive. Making changes in the manufacturing process must be carefully considered.” He added: “But if they are trying to collect as much light as possible, it may make sense to do it.”