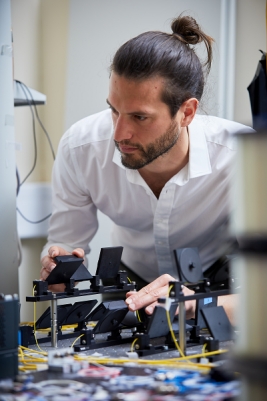 Researchers at Toshiba’s facility in Cambridge, UK, have dramatically extended the range of quantum-encrypted communication over optical fiber.

Andrew Shields and colleagues, who have just published their work in the journal Nature Photonics, report that a new optical technique called “dual-band stabilization” is able to cancel out temperature fluctuations in fiber that have the effect of scrambling quantum bits (qubits) of information over long distances.

Until now, that has limited commercial quantum key distribution (QKD) to less than 200 km. But when used in combination with Toshiba’s twin-field QKD approach, a range of 600 km has now been demonstrated.

“This latest advance extends the maximum span of a quantum link, so that it is possible to connect cities across countries and continents, without using trusted intermediate nodes,” noted Shields, head of the Toshiba Quantum Information Group Quantum Technology Division at Toshiba Europe.

“Implemented along with satellite QKD, it will allow us to build a global network for quantum secured communications.”

The first wavelength is used to cancel the rapidly varying fluctuations, while the second is used for fine adjustment of the phase. The second signal uses the same wavelength as that employed to send the optical qubits.

The two signals interfere at a beam splitter positioned in a repeater station, and when that interference is monitored by detectors it can be used to control a feedback system that removes noise introduced by the channel.

Previous attempts at stabilization have used intense signals at the same wavelength as the quantum signals, but this approach generates Rayleigh scattering noise that limits the range and speed of the quantum link.

The new technique has made it possible to hold the optical phase of a quantum signal constant to within a fraction of a wavelength, even after propagation through hundreds of kilometers of fiber.

“Without cancelling these fluctuations in real time, the fiber would expand and contract with temperature changes, scrambling the quantum information,” explains the firm.

Describing the result as “very exciting”, Mirko Pittaluga - lead author of the journal article - suggested that the range could be extended beyond the 600 km already demonstrated by the Toshiba team:

“With the new techniques we have developed, further extensions of the communication distance for QKD are still possible and our solutions can also be applied to other quantum communications protocols and applications.”

OpenQKD collaboration
The work by Pittaluga and colleagues was partially funded through the European Commission project “OpenQKD”. Co-ordinated by the Austrian Institute of Technology in Vienna the €18 million effort also features ID Quantique and several major telecommunications companies working on a series of open testbeds.

Corning also collaborated in the work, providing its “SMF-28® ULL” optical fiber. “The team is now engineering the proposed solutions to simplify their future adoption and deployment,” said Toshiba. 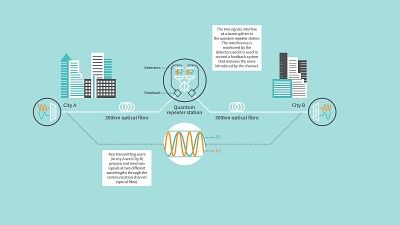 The new development follows last year’s installation of the UK’s first industrial quantum-secure network, completed by Toshiba with BT. The ultra-secure link transmits data between the National Composites Centre (NCC) and the Centre for Modelling & Simulation (CFMS) in Bristol.

It works by distributing to the intended users a common, secret key that can be used to encrypt the information exchanged over the regular communication channel.

Any interception of the link by an undesignated user would be detected as eavesdropping by the intended users, who can then protect their communication.