Researchers at Gothenburg and KTH universities, both based in Sweden, achieve quantum photonics breakthroughs.

Quantum mechanics can be used to create more stable and more easily produced organic solar cells, according to new research at the University of Gothenburg, Sweden.

Organic solar cells have many advantages compared with traditional silicon-based solar cells. They can be manufactured cheaply at a large scale using printing presses, and they are light, malleable and flexible.

A problem, identified by the Gothenburg researchers, is that today’s organic solar cells are not as stable and effective as silicon-based solar cells. In a recently published study, the researchers have taken on this problem and say they have found a way that can lead to more cost-effective solar cell technology. The work is described in Nature Communications.

“There are excellent opportunities for utilising quantum efficiencies to change different chemical and material characteristics,” said Karl Börjesson, professor of physical chemistry at the University of Gothenburg and the main author of the study. “We have developed a method that makes it possible to increase diffusion of energy in organic materials. This allows us to create organic solar cells with simpler structure.”

The key to the achievement of Börjesson’s team is ensuring that the energy in the solar cells is effectively transferred to the right place. Organic solar cells contain two materials, and the absorbed energy from the sun needs to be diffused – to move – to the interface between the materials.

However diffusion is an ineffective process since the energy travels slowly and risks being lost as heat before it reaches this interface. The solution has been to blend the two materials in solar cells to reduce the distance and so the energy reaches the interface more quickly. But unfortunately, says the Gothenburg team, this also leads to the solar cells not being in thermodynamic equilibrium, making the design less durable over time than it could be.

The researchers have shown that their new method allows the energy to be transferred over a longer distance, which means that the complicated blending of materials in solar cells can be avoided. The key behind the method is quantum effects, where light and material are combined into hybrid light-matter states.

Prof. Börjesson commented, “When we couple light and matter strongly, the energy is spread out over the entire system. If the system – as in this case – consists of multiple materials, the energy can be channeled to the interface. We show that the energy travels faster to the interfaces when the materials are strongly coupled. This means that the materials in solar cells do not need to be physically blended since they are blended at the quantum level. This also leads to the system being in thermodynamic equilibrium.”

According to Börjesson, the discovery can influence how organic solar cells are manufactured, since it becomes possible to increase their durability while the solar cells can be made with a simple layered structure. He also notes that the research is really an outgrowth of a concept already found in nature.

“Nature uses strong coupling between molecules to effectively transfer solar energy in photosynthesis. In principle, we have shown that the same basic concept can be applied to organic solar cells.” 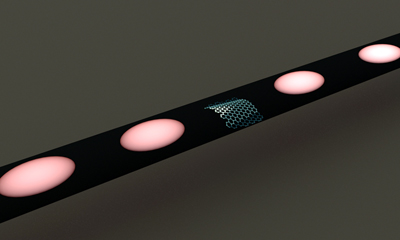 The development of and opportunities presented by a “quantum internet” depends on the complexities of harnessing light to transmit quantum information over fiber optic networks. A potential step forward was reported today by researchers at KTH Royal Institute of Technology, Stockholm, Sweden, who have developed integrated chips that can generate photons on demand – and without the need for extreme refrigeration.

KTH Professor Val Zwiller says that in order to integrate quantum computing seamlessly with fiber-optic networks, a more promising approach would be to harness photons. “The photonic approach offers a natural link between communication and computation,” he said. “That’s important, since the end goal is to transmit the processed quantum information using light.”

But in order for photons to deliver qubits on-demand in quantum systems, they need to be emitted in a deterministic, rather than probabilistic, fashion. This can be accomplished at extremely low temperatures in artificial atoms, but the research group at KTH has reported in the journal Advanced Quantum technologies a new way to make it work in optical integrated circuits — and at room temperature.

The new method enables photon emitters to be precisely positioned in integrated optical circuits that resemble copper wires for electricity, except that they carry light instead, said Associate Professor Ali Elshaari.

The researchers harnessed the single-photon-emitting properties of hexagonal boron nitride (hBN), a layered material. hBN is a compound commonly used is used ceramics, alloys, resins, plastics and rubbers to give them self-lubricating properties. They integrated the material with silicon nitride waveguides to direct the emitted photons.

The achievement opens a path to hybrid integration, that is, incorporating atom-like single-photon emitters into photonic platforms that cannot emit light efficiently on demand.