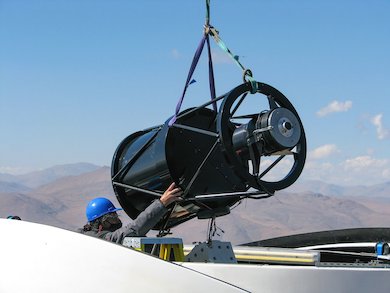 On the lookout: TBT2

Efforts to identify and monitor near-Earth objects, including asteroids that could pose a risk of impact, have taken a step forward at Chile's La Silla Observatory.

The European Space Agency's Test-Bed Telescope 2 (TBT2), the second of two instruments designed to test hardware and software for a future network of more advanced telescopes, has started operations at the the European Southern Observatory site.

TBT2 features a 56-centimeter glass-ceramic primary mirror, a relatively moderate size allowing the telescope to act as a technology demonstrator for important functions such as robotic real-time control and autonomous data processing.

"The telescope is a test-bed to demonstrate the capabilities needed to detect and follow-up near-Earth objects with the same telescope system," commented ESA's Clemens Heese, leader of the project.

The Test-Bed Telescope consortium, with members from Germany, Spain and the Czech Republic, installed the first TBT1 instrument at the ESA's Cebreros Satellite Tracking Station in Spain in 2015, with TBT2 now taking its place as the identical Southern Hemisphere counterpart.

TBT1 and 2 are significant as a step towards a future network of telescopes designed to survey near-Earth objects more comprehensively and act as an early-warning system for dangerous objects.

The planned first telescope in this network, the Near Earth Object Survey Telescope or NEOSTEL, is also known as "Flyeye" because of its incorporation of compound optics into the design of the telescope.

Splitting the image into 16 subimages via compound optics should enable the Flyeye observatory to obtain an enhanced field of view, potentially 6.7 degrees or roughly 13 times the diameter of the Moon as seen from the Earth, reducing the chances of missing interesting objects. The Flyeye telescope is due to be installed on Sicily's Monte Mufara mountain.

The long-term vision is for the network of monitoring observatories to be entirely robotic, with software controlling the scheduling of observations and the reporting of the objects it has detected. TBT1 and 2 will now serve as evaluation platforms for these control technologies, to assess and optimize their use for asteroid detection.

"The start of observations of TBT2 at La Silla will enable the observing system to work in its intended two-telescope configuration, finally fulfilling the project’s objectives," said Clemens Heese.

In other astronomical photonics news, a fiber-optic-based dosimeter developed by France's iXblue in partnership with CNES and CERN has been flown to the International Space Station for testing, as a means of monitoring radiation levels in orbit. 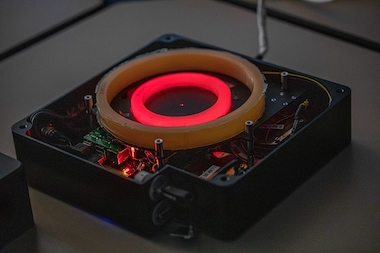 Using fiber-optics in Earth-based dosimeters is known to potentially provide a number of advantages over conventional sensors, such as their ability to measure remotely and in real-time.

Design principles have included employing optical fibers doped with specific compounds that produce stable color centers when they interact with radiation, or arranging for chemical species with particular absorption fingerprints to migrate from a fiber's cladding to core.

LUMINA exploits the darkening of iXblue optical fibers that can take place under the influence of radiation, an effect the company noticed when its fibers were used in orbiting satellites. The fiber darkening decreases the output light signal, making it possible to correlate the optical loss with the radiation dose received, even at very low levels.

"iXblue fibers have been used for more than two decades in our fiber-optic gyroscopes in satellites, and we noticed that these fibers darken under the effect of radiation," said iXblue's Thierry Robin.

"Hence the idea of using the properties of these radiosensitive fibers to measure the level of ionizing radiation inside the space station. We are extremely proud to be part of this mission and look forward to receiving the first results."