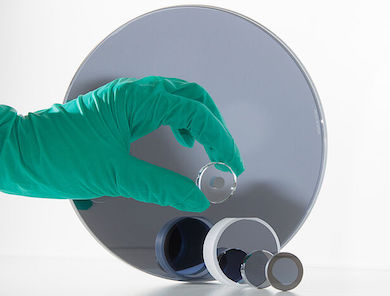 A project involving the University of Vienna, NIST, Thorlabs and the University of Kansas has developed a new manufacturing method for optical supermirrors, potentially benefiting multiple photonics applications.

Thorlabs existing range of crystalline supermirrors, said to demonstrate reflectance greater than 99.99 percent in near-IR wavelengths, are manufactured using molecular beam epitaxy, and designed for use in applications such as optical atomic clocks.

This kind of mirror technology also plays a key role in the enhanced sensitivity of the LIGO project watching for gravitational waves.

The Vienna-led team set out to develop a novel production method that would make efficient supermirrors possible for mid-IR wavelengths instead, opening up applications for such components in sensing and biophotonics where that wavelength range is critical. The results were reported in Optica.

"Low-loss mirrors are a key technology for many different research fields," said Oliver Heckl, head of Vienna's Christian Doppler Laboratory for Mid-IR Spectroscopy and Semiconductor Optics. "They are the link for such diverse research fields as cancer diagnosis and gravitational wave detection."

Use of an epitaxial layer transfer process, as in the existing Thorlabs components, has become an accepted technique for creation of monocystalline heterostructures on a base wafer for subsequent transfer to a curved substrate.

However, in practice "extending the performance of monocrystalline coatings further into the infrared spectral region is not trivial," noted the project in its published paper. Although prototype mid-IR mirrors have been manufactured this way and helped in the study of atmospheric chemical kinetics, their optical losses were unhelpfully influenced by "excess scatter driven by structural defects in the very thick 20 to 30 micron epitaxial multi-layers."

Seeking an alternative approach, the project developed what it describes as a completely new optical coating technology, the first attempt at fabricating crystalline high-reflectivity coatings for wavelengths around 4 microns.

The answer involved reducing the thickness of the surface structure made in an individual epitaxy step, using instead stacked optical coatings to create two "half mirror" structures from high-purity GaAs/AlGaAs interference coatings, which could then be bonded together on curved silicon optical substrates.

Reducing the thickness of material created in an individual deposition can improve the optical quality of that layer, reducing scatter loss due to low surface and interfacial roughness. When the two higher-quality half-structures are bonded together, the performance of the final supermirror is duly enhanced.

In trials, supermirrors created in this fashion demonstrated "record-low excess optical loss" below 10 parts per million at a wavelength of 4.54 microns, "the longest wavelength demonstrated to date" according to the project.

Close inspection of the new components also revealed a previously unknown effect of polarization-dependent absorption, which could itself now provide a route to further refinement of the supermirrors and optimization of bandwidth and reflectivity.

One ultimate goal is expansion of the mirrors' optical bandwidth to allow them to be used efficiently with optical frequency combs, commonly employed in the detection of characteristic chemical fingerprints for sensing applications.

"This will enable the analysis of particularly complex gas mixtures with unprecedented accuracy," commented the project team.