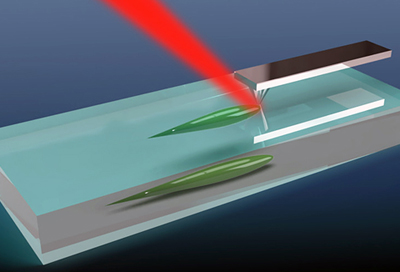 An infrared beam can reveal nano-level imperfections and damage that weakens glass.

For the first time, the subsurface structural changes of silica glass due to nanoscale wear and damage has been revealed via spectroscopy, which may lead to improvements in glass products such as electronic displays and vehicle windshields, according to a team of international researchers.

“One of the main research areas in my group is glass surface science, chiefly the relationship between property, the structure of the glass, and mechanical and chemical properties, especially mechanical durability and chemical durability,” commented Seong Kim, Penn State University distinguished professor of chemical engineering and co-lead author of the study, published in Acta Materialia.

Infrared spectroscopy can detect surface defects only to a degree. If the type of defect that is generated on the glass surface is smaller than 10 µm, which is below the 10 µm wavelength of infrared spectroscopy, it cannot be properly analyzed or imaged. Analysis techniques such as Raman spectroscopy used in the glass research community work better in terms of spatial resolution, but are still not sufficient for nano-scale structural analysis.

Kim’s team wanted to develop a technique that would find what kind of structure change occurs around nano-level indentations into the glass surface. As part of the study, they indented the glass surface with a tiny tip that can make nano indents a few hundred nanometers deep and one or two microns wide.

According to the researchers, a good example of this is Gorilla Glass, manufactured by Corning as display glass for electronics such as cellphones, and more recently for car and airplane windshields. This glass is extremely strong when it leaves the plant, but by the time it reaches manufacturers, the glass is weaker.

When Kim’s team made their ultra-tiny indentations into the glass, they wanted to see what kind of structural change occurred in and around the indent due to damage to the glass. “So, because the maximum size of the indents were only a few microns, we needed to have a highly spatially resolved infrared spectroscopy technique to characterize this,” said Kim.

“Until very recently, studies like Seong’s were either indirect because you cannot really do imaging of the small things happening at the nano scale, or they will be touching on physical things like atoms or molecules but not the optical properties,” said Rotkin. “So, our instrument is really unique because it allows you to do optics studies at extremely small scales, which was never possible in the past.”

“Seong’s students made scratches in the glass,” said Rotkin. “Then you see the scratch, it’s interesting and stands out, like if you cleared an opening in the forest by removing trees. And when you clear away the trees, it might push a bush to the ground and it somehow changes the color of the leaves due to some damage.”

In a related development, researchers have shown that 3D printing can be used to make highly precise and complex miniature lenses with sizes of just a few microns. The microlenses can be used to correct color distortion during imaging, enabling small and lightweight cameras that can be designed for a variety of applications.

“The ability to 3D print complex micro-optics means that they can be fabricated directly onto many different surfaces such as the CCD or CMOS chips used in digital cameras,” said Michael Schmid, a member of the research team from University of Stuttgart in Germany. “The micro-optics can also be printed on the end of optical fibers to create very small medical endoscopes with excellent imaging quality.” The work is described in Optics Letters.

In the paper, researchers led by Harald Giessen detail how they used a type of 3D printing known as two-photon lithography to create lenses that combine refractive and diffractive surfaces. They also show that combining different materials can improve the optical performance of these lenses.

“3D printing of micro-optics has improved drastically over the past few years and offers a design freedom not available from other methods,” said Schmid. “Our optimized approach for 3D printing complex micro-optics opens many possibilities for creating new and innovative optical designs that can benefit many research fields and applications.” 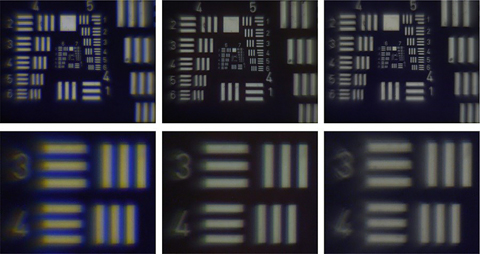 Stuttgart has tested its new lenses. Click for info.

Pushing the limits of 3D printing

Two-photon lithography uses a focused laser beam to solidify, or polymerize, a liquid light-sensitive material known as photoresist. The optical phenomenon known as two-photon absorption allows cubic micrometer volumes of the photoresist to be polymerized, which enables fabrication of complex optical structures on the micron scale.

The research team has been investigating and optimizing micro-optics made with two-photon lithography for the past 10 years. “We noticed that color errors known as chromatic aberrations were present in some of the images created with our micro-optics, so we set out to design 3D printed lenses with improved optical performance to reduce these errors,” said Schmid.

The researchers designed miniature versions of lenses traditionally used to correct for chromatic aberrations. They began with an achromatic lens, which combines a refractive and diffractive component to limit the effects of chromatic aberration by bringing two wavelengths into focus on the same plane. The researchers used a commercially available two-photon lithography instrument made by NanoScribe GmbH to add a diffractive surface to a printed smooth refractive lens in one step.