University of Adelaide project could prove useful for many beam-shaping applications. 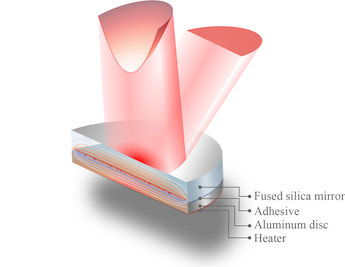 Detection of gravitational waves at observatories such as the Laser Interferometer Gravitational Wave Observatory (LIGO) sites in the US requires complex high-precision optical equipment, to detect the minute changes made to a traveling beam of light when a wave passes.

Mirrors polished to extraordinary precision are a key part of the interferometry operation at the heart of gravitational wave detection, and a project at the University of Adelaide has developed a new type of deformable mirror that could enhance the sensitivity of the overall process. The work was published in Applied Optics.

"In addition to improving today’s gravitational wave detectors, these new mirrors will also be useful for increasing sensitivity in next generation detectors and allow detection of new sources of gravitational waves," said Huy Tuong Cao from the University of Adelaide node of the Australian Research Council's Centre of Excellence for Gravitational Waves Discovery (OzGrav).

The breakthrough involves the construction of a deformable mirror based on the bimetallic effect, in which a temperature change is used to cause a mechanical displacement. An aluminium disc is attached on one side to a fused silica mirror via an adhesive, and to a heating element on the opposite side. When the two are heated together the metal expands more than the glass, causing the mirror to bend.

The new design not only creates a large amount of precise actuation but is also compact and requires minimum modifications to existing systems. Both the fused silica mirrors and aluminium plates used to create the deformable mirror are commercially available. To attach the two layers, the researchers carefully selected a bonding adhesive that would maximize actuation.

"We are reaching a point where the precision needed to improve the sensitivity of gravitational wave detectors is beyond what can be accomplished with the fabrication techniques used to make deformable mirrors,” said Cao. "Importantly, the new design has fewer optical surfaces for the laser beam to travel through, reducing light loss caused by scattering or absorption of coatings."

A new thermally activated bimorph mirror was conceived as a collaboration between the University and LIGO. According to the team's published paper, the prototype demonstrated properties of linear response, dynamic range and aberration which fit the requirements of A+ upgrade of the LIGO observatories currently underway.

The A+ (from Advanced LIGO Plus) overhaul is due to be completed by September 2023, and is intended to address two specific technical limitations of the current system: quantum mechanical uncertainty, and classical thermal Brownian noise in mirror coatings. Successfully exploiting research breakthroughs made since the original LIGO design was fixed a decade ago may make it possible to almost double the instrument sensitivity.

Adaptive wavefront control, being tackled jointly by the Australian OzGrav center and a UK team based around the University of Birmingham's Institute for Gravitational Wave Astronomy, is one key goal of the A+ upgrade, alongside improved optical coatings, new suspension fibers for the optical components, and computational enhancements. The OzGrav team believes that its mirror design could now play a significant role in LIGO's future.

"Our new mirror provides a large actuation range with great precision," said Cao. "The simplicity of the design means it can turn commercially available optics into a deformable mirror without any complicated or expensive equipment. This makes it useful for any system where precise control of beam shape is crucial."