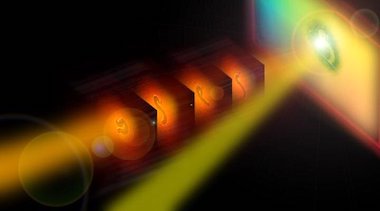 Imaging of chemical species using mid-infrared light is a key technique for bioimaging and environmental monitoring, but the mid-IR detectors needed for the task have tended to expensive, complex and relatively inefficient.

Current mid-IR cameras are based on low bandgap semiconductor materials that require cryogenic cooling to reduce thermally excited electronic noise, and electronically cooled alternatives are at present not on par with silicon-based CCD cameras for visible light, according to a team at the University of California, Irvine (UCI).

The UCI project has now demonstrated a way to make a standard Si-based CCD used with visible light respond instead to incoming mid-IR irradiation, through a non-degenerate two-photon absorption method. This potentially allows such CCDs to perform mid-IR chemical imaging. The work was published in Light Science & Applications.

Exploiting non-linear optics (NLO) in the detection of mid-IR signals has been investigated before, but has usually involved the use of a suitable NLO medium or crystal, added to the Si-based detector.

UCI's breakthrough has been to arrange instead for non-degenerate two-photon absorption (NTA) to take place. NTA involves the absorption of two photons by a molecule, but refers specifically to a case where the energies of the photonics are similar but not exactly identical.

"NTA in wide bandgap semiconductor materials has been shown to permit the detection of MIR radiation at room temperature with the help of an additional visible or NIR probe," noted the project in its published paper. "NTA does not depend on phase matching and avoids the need for an NLO crystal altogether, offering a much simpler detection strategy."

Broad adoption and development of the technology

Silicon has been considered a poor material for NTA, but the UCI team set out to demonstrate that detecting MIR radiation through NTA in silicon was feasible by effectively using the non-linear optical properties of the Si chip itself to create a MIR-specific response in the camera, with the assistance of a separate pump pulse.

Having proved the principle on a single-pixel Si detector, UCI investigated scaling-up the operation to create direct-on-chip NTA in a silicon-based CCD camera, and then tested its use in chemical imaging operations.

Trials on an organic polymer grease and a polymer used in ion exchange membranes showed that clear chemical contrast from a particular bond-stretching mid-IR resonant frequency was possible. Further tests involved the imaging of the wing of a bee, a natural structure rich in chitin with several overlapping spectral features from the organic molecules present, and where the UCI approach was still able to demonstrate effective contrast difference for mid-IR imaging.

This NTA approach could now allow the established advantages of modern visible light CCD detectors, such as high pixel numbers and optimized electronics, to be applied to mid-IR imaging in pharmaceutical quality assurance, geologic mineral sampling, or microscopic inspection of biological samples.

Higher NTA efficiencies can be obtained with shorter pulses, so future developments could see the same approach applied to femtosecond laser pulses. Other detector materials than silicon are also now under investigation, with GaAs known to exhibit higher two-photon absorption efficiencies and a steeper band edge absorption than silicon, which are both favorable for mid-IR detection through NTA.

"We are excited to offer this new detection strategy to those who use mid-IR light for imaging," said David Knez of UCI. "We have high hopes that the simplicity and versatility of this approach allows for the broad adoption and development of the technology."