Imaging technology previously used on the Dawn mission remains the instrument of choice. 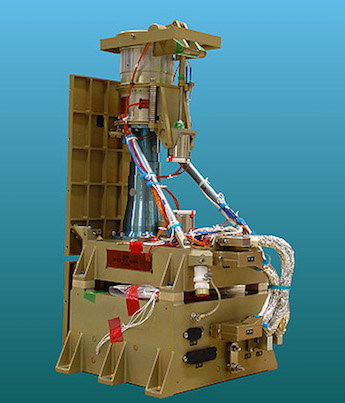 In 2023, if all goes according to schedule, the ESA will launch a spacecraft to the Didymos asteroid pair.

Design work on the Hera vehicle is currently underway, but it has already been decided that the camera system used to navigate through space and survey the twin Didymos bodies will be the same Asteroid Framing Camera (AFC) previously employed by the Dawn mission to examine the protoplanets Ceres and Vesta.

Having proved its worth on Dawn, which mapped the designated asteroid targets without problem from distances as low as 30 kilometers in 2011 and 2012, and with two completed spare AFC assemblies ready and waiting at the Max Planck Institute for Solar System Research as part of the original AFC development program, the ESA has concluded there is no reason to make changes to that aspect of the mission.

On Dawn the AFC instrument had a dual function, to both map Vesta and Ceres so that the exact topography and reflective characteristics of the surface could be assessed, and provide the critical orbit navigation to the craft on its journey to the asteroids. There was no other camera aboard the spacecraft.

"The AFC worked like clockwork throughout Dawn's eleven-year lifetime," said Max Planck Institute's Holger Sierks. "The camera, equipped with seven spectral filters from the visible to the near-infrared, was able to gather spectral information on Ceres' striking bright spots as well as the rest of the asteroid. An eighth clear filter was used when the AFC was employed for navigation purposes and for broadband surface science."

The complete AFC platform consists of two identical but physically separate assemblies, a necessary redundancy in case of failure. According to specifications published by Max Planck Institute it uses a 20 millimeter aperture, f/7.9 refractive optical system with a focal length of 150 millimeters. A CCD sensor originally supplied by Thomson-CSF, now Thales, has a resolution of 1024 × 1024 pixels and yields a 5.5 x 5.5-degree field of view.

A key component is the eight-position filter wheel that allows the camera to carry out both spectrally selective imaging through any of seven narrow band filters, and panchromatic imaging through a clear filter at wavelengths ranging from 400 to 1050 nanometers. In use during the Dawn mission, the AFC offered resolutions of 17 meters per pixel for Vesta and 66 meters per pixel for Ceres.

Two AFC flight units were supplied to NASA for Dawn by the Max Planck Institute, in cooperation with the DLR German Aerospace Center and the Technical University of Braunschweig's Institute of Computer and Network Engineering. A spare camera was built and kept at the Institute to replace a flight unit if needed.

“We still had spare flight-quality subsystems, including the optics, that we could integrate into a full camera, so we ended up with two flight-ready spares on the shelf,” said Sierks. “We wanted to find a flight use for them, and decided we should contribute these fully mission-proven cameras to Europe’s next asteroid mission free of charge.”

That mission was conceived as the Asteroid Impact and Deflection Assessment (AIDA) project, specifically investigating aspects of safety and security related to potential asteroid deflection in the face of future impact from space.

The intention was for the ESA's Hera to orbit the Didymos asteroid pair, and a separate NASA probe christened DART to deliberately impact the surface. Changes in funding priorities have meant that the two probes are currently due to launch separately, with Hera now arriving some two years after DART's impact, although the schedule is being reviewed.

While the AFC was designed specifically for Vesta and Ceres, Sierks commented that the AFC camera is also a very good fit for Hera, thanks to its dual science and navigation functionality.

"When we designed it, those two asteroids were only known to us as little dots in the sky, just a few pixels across at best using the Hubble Space Telescope, like the Didymos system today," he said. "The camera’s optics, the work of the Kayser-Threde company in Munich now owned by OHB, are distortion free with a sharp focus, right down to 150 meters from the target surface."